However this is different from the western system that uses the Tropical Zodiac which is based on orientation of the Earth to the Sun and derived from the equinox and solstices. Thus the Sun is assumed to be at zero degrees of Aries at the Spring Equinox. Thus all the other planets are adjusted to a theoretical position based on the observable seasons and do not represent the actual position of the planets in the sky relative to the stars.

This was fine 2,000 years ago when the tropical signs and the constellations were in the same position. However due to a phenomena called the Precession of the Equinoxes which was known in the Vedic age, the tropical signs have drifted away from the constellations.To explain this: at the Vernal (Spring) Equinox, Sun as seen from Earth is not at the same point against the background of the fixed stars relative to where it was at the same time a year ago. It arrives at the Vernal Equinox point fractionally earlier, making the seasonal year about 20 minutes shorter than the sidereal year.

This is because the earth wobbles like a top as it goes around the Sun due to its slight tilt. The polar axis does not point to the same star over the course of one orbit around the sun, it drifts backwards ever so slightly. As the direction of the wobble around the earth’s axis is in opposition to the Sun, it looks like the vernal point is moving backwards through the 12 signs (tracing an imaginary cone like shape). This called the Precession of Equinox and the process is so slow, that the movement is about one degree per 72 years or it takes almost 2160 years to regress through a whole sign and 25,920 years to trace one cone-like shape. 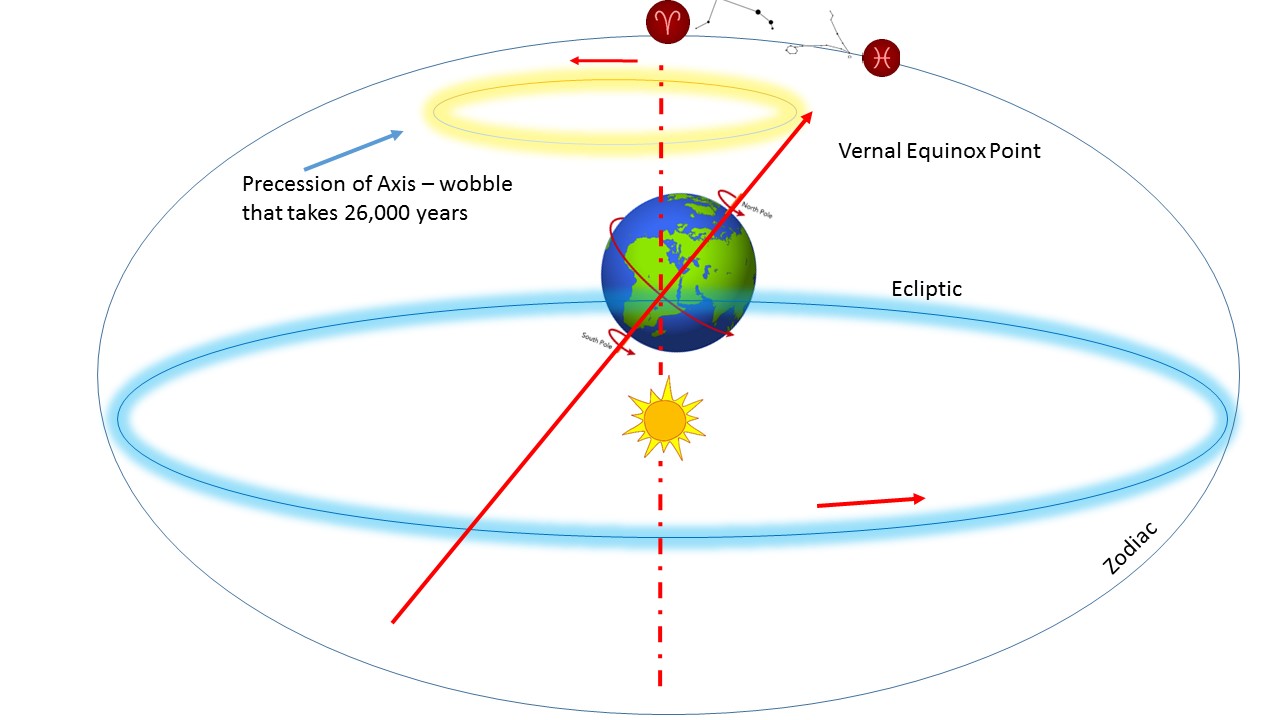 The charts below show the position of planets on the Spring Equinox this year on March 20, 2017 in London at 10.29am. The first one is based on the Sidereal Zodiac using and it shows the Sun at 5°54 minutes in Pisces. 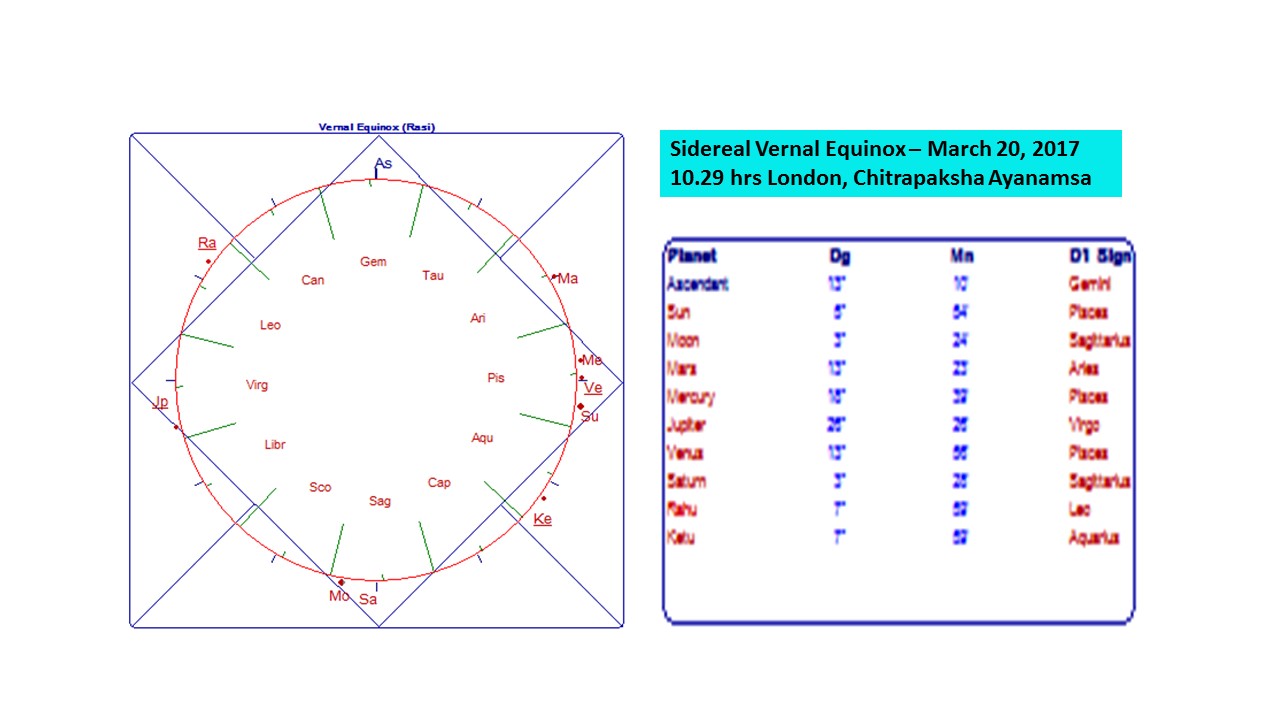 The second chart below is based on Tropical Zodiac and the chart shows the Sun at 0° degrees Aries, differing from the Sidereal Ascendant by 24°6 minutes. 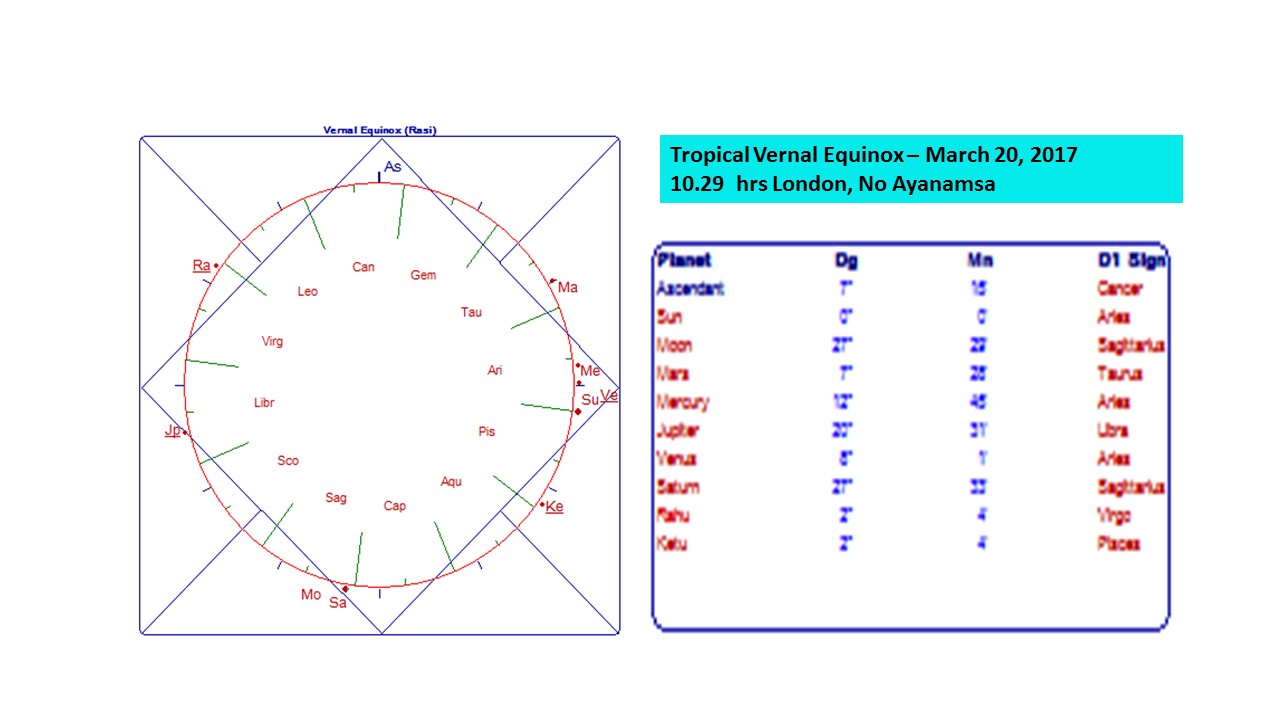 Therefore we may find that our Sun Signs and planetary positions are totally different in the Sidereal System from that of the Tropical system because of this 24 degree difference caused by Precession of Equinox. 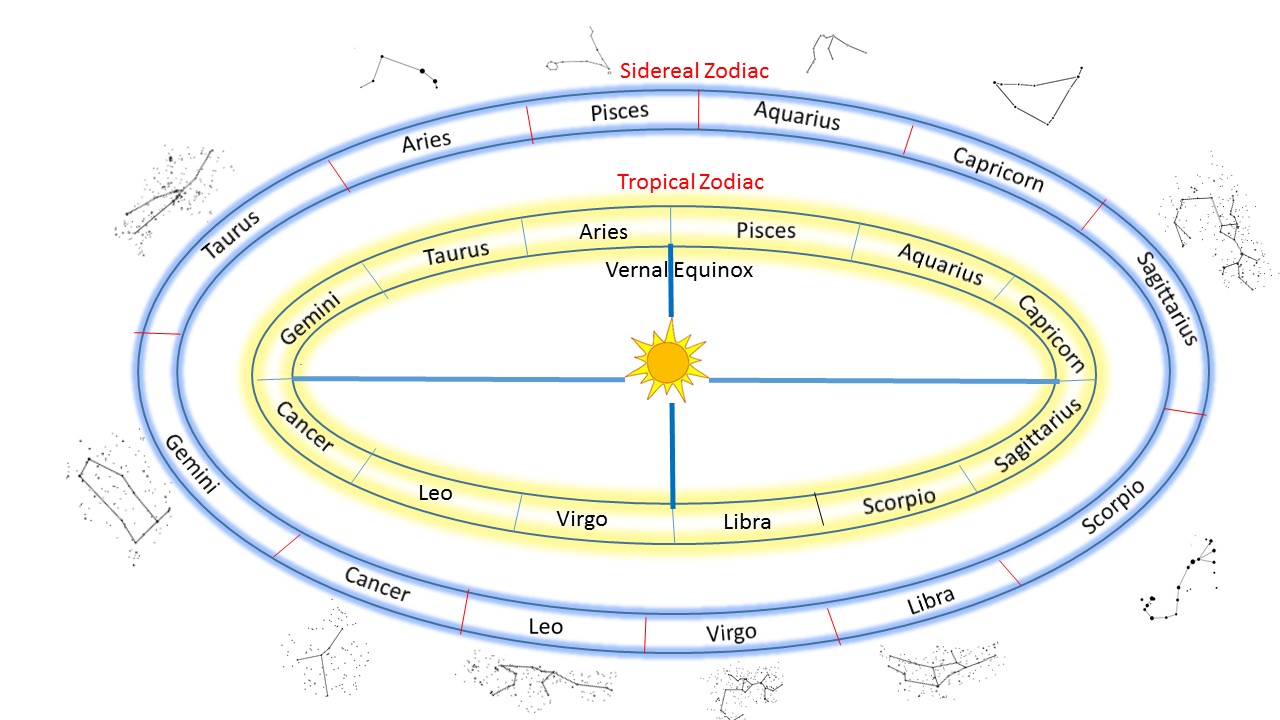 To sum up, the difference is because in the Sidereal system we take the point 180 degrees opposite the star Spica as the starting point of the Zodiac which is the 1st degree of Aries and in a Tropical Zodiac the first point of Aries is taken as the Vernal Equinox, which may not be in Aries against the backdrop of stars.