In a Vedic reading, the chart is taken as a whole to understand all aspects of one’s life. Merely commenting on the position of the Sun or Moon taken on its own would be like a weaver looking at one patch instead of the whole carpet to make a judgement.

In Jyotish the 12 signs are derived from the stars that make up the Zodiac and these are seen as fixed (relatively speaking) and the grahas (loosely defined as planets) are the moving bodies in the backdrop of the stars as seen from the earth. Only nine grahas are taken into account viz. Sun, Moon, Mars, Mercury, Jupiter, Venus, Saturn and Rahu and Ketu (north and south nodes of the moon) respectively. Uranus, Neptune and Pluto were not visible to the naked eye, hence were not taken. The Ascendant is the point on the eastern horizon of the sky at the moment of birth.

A human being has different layers of consciousness viz., the soul, body, mind and intellect. Likewise in a chart the Ascendant represents the body and intelligence, the Moon the emotions and mental faculty and the Sun, the soul of the individual. The positions of all grahas are taken together to arrive at a judgement with special emphasis on Ascendant Lord, Moon and the Sun. The 12 signs show the environment in which one has to operate. The 12 signs are composed of 27 Nakshatras or stars which influence the signs at a subtle level. The 12 houses are ruled by the nine grahas and govern different areas of the life of an individual and the position of planets in various houses show the part of life that will be affected by the planet.

For example when the Sun is in Aries it is exalted and when placed in the 10th house, it has directional strength and becomes very positive. On the other hand, when placed in the 4th house it not fortunate at all and in the 12th has death like energy. Sun in Aries in the 10th house for a Cancer Ascendant, confers high status to the person and makes him wealthy as Sun lords the 2nd house, Leo. The same exalted Sun in Aries for a Scorpio Ascendant would be in the 6th house and thereby making the individual focus on service, Sun being the 10th house ruler of work, but he may not be wealthy. Even to conclusively make these judgements one has to look at the conjunctions and aspects of other planets and signs that the Sun receives.

The dasha system unique to the Vedic astrology system, shows the time period governed by different grahas and is used to time specific events. Apart from the main chart called the Rasi, there are 15 other divisional charts derived from the Rasi Chart that are recommended by Sage Parashara to be seen for marriage, children, career, wealth, devotion, internal strength and various other aspects.

There is also a king maker in the chart called the Atma Karaka or the soul significator, the graha with the highest degree. The Atma Karaka shows the purpose of the soul in this birth and the chart has to be thoroughly examined from this point separately.

There are a lot more things to be considered and the explanation given above is not exhaustive, however a knowledgeable Vedic astrologer with the blessings of his Guru and reasonable experience is able to have multi-dimensional view to arrive at an appropriate judgement quickly.

The 12 houses in a Vedic Chart 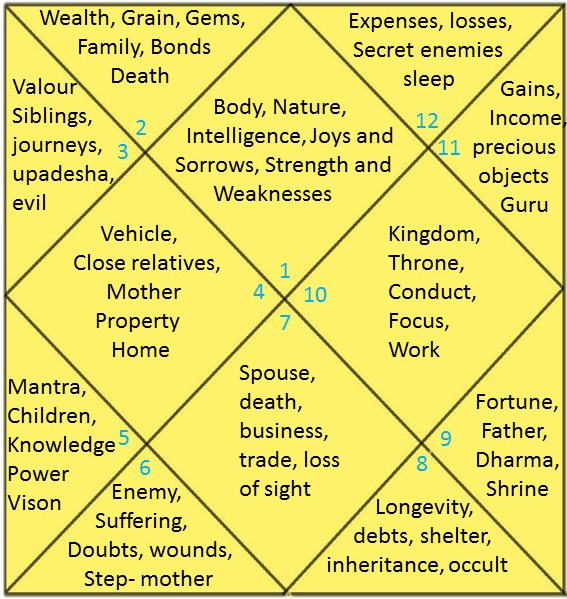