Yantra is a sacred symbol or an instrument, a physical manifestation of a
concept, mantra or a deity and when used in conjunction with a mantra is a powerful remedy for bringing about a change in mental and material states of beings. Symbols have been used from time immemorial in all cultures and they communicate ideas faster and deeper as the right brain is stimulated which is more visual and non-verbal.

Drawing a Yantra helps in increasing concentration. In the Ashtanga practice this is likened to “Dharana” or the one-pointed concentration. When we concentrate on drawing and painting a Yantra, there is a stillness that is experienced by us which increases our mindfulness.

There are many uses of Yantras, however it is only appropriate to used them in “Shanthi Kala”, meaning for peaceful tasks. There are many types of Yantras, and I have described here the Yantras of the Nine Planets of the Vedic Astrology that I drew and painted under the guidance of Mavis Gewant, a Sacred Artist and a disciple of Harish Johari.

I have presented the planets in the order of the Guna Chakra. The Sun, Moon and Jupiter are Sattva guna planets. Mercury and Venus are Rajas natured and Saturn and Mars are Tamasic. Rahu separates the Sattva from the Rajas and Ketu separates the Tamas from Rajas. 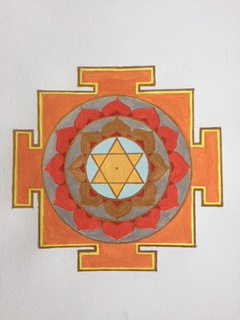 The Sun centre of the Universe and the King of the Solar System. He is represented by the number One, as he represents the Atma or Soul. He is the royal planet that shows authority and leadership.

He is radiant, and hence painted in typical yellow-orange and copper gold colours. The 12 petals in the middle circle represent the Adityas (12 names of Sun) of the 12 signs of the Zodiac.

Painting a Sun Yantra improves confidence. The colour orange is said to reduce depression and make one energetic. It also promotes success and prosperity. Sun is also the father, hence one can honour this relationship by painting a Sun Yantra. 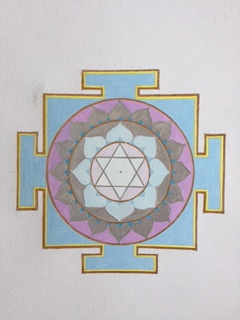 The Moon is our mind and is ever flowing with our thoughts. It represents motion and duality. So it is represented by the number Two. The Moon is feminine, soft and is the seat of emotion. It is very intuitive.

The Yantra is soft and painted with blue, white and pink colours and there is a lot of silver representing its reflective power. The sixteen petals are the sixteen rays or sixteen phases of the Moon, the 15 visible and one invisible.

In moonlight, the herbs and medicinal plants gain strength, Moon is a source of nourishment and healing. In our charts, the moon also represents the mother, the one who is compassionate.

By painting this Yantra, one can be more intuitive and creative and become more compassionate. 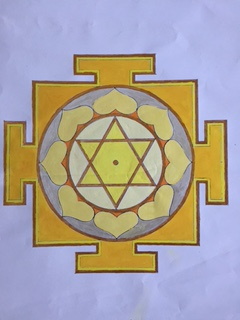 Jupiter is the heaviest planet in the solar system, he is known as “Guru” in
Sanskrit. Guru means heavy and also represents a teacher or guide – “the one who dispels darkness”. He gives discriminative power, “Viveka” and removes the veil of ignorance.

Jupiter is represented by the number Three. Three is a holy number, it represents the Trinity, there are three states of being – Waking, Dreaming and Deep Sleep in Vedanta Philosophy, and the Buddhists scriptures are known as Tripitakas. The third eye is also the eye of discernment. The number three is also associated with luck and we are familiar with the expression “third time lucky”. Jupiter brings us good fortune.

Jupiter is expansionary and the Yantra is depicted in yellow, the colour of
intellect. The eight petals are for the eight directions and the deities associated with them.

Painting a Jupiter Yantra helps to heighten intellect and devote one-self to selfless service. It increases our sense of responsibility to the community at large. In woman’s Vedic chart, Jupiter represents her husband and generally Jupiter also represents children. If the Jupiter is afflicted, one can paint this Yantra for a better family life. 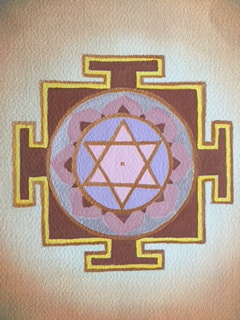 Rahu is the north node of the Moon. It is a shadow planet and is represented by the number Four. This number can give a strong foundation as it represents the four sides of a square or the four cardinal directions. Rahu has strong ambition and seeks to enjoy what the world has to offer. Rahu is the reason for re-birth and one has to transcend this planet to attain liberation.

Rahu is a lateral thinker and represents all things that are outside the boundaries, he is a rebel or a revolutionary.

The Yantra is painted in earthy smoky colours sometimes brown or deep indigo blue. Earthiness represents materiality and indigo can be addictive.

This Yantra can be painted when one wants to manifest a deep desire. On a more subtle level as one understands how Rahu functions and the reasons for our birth, it leads us towards emancipation as well. Gautama Buddha was disturbed by four sights, a crippled old man, a sick man, a decaying corpse and an ascetic which led him to seek liberation and after that he preached the path of the four Noble truths – suffering, its origin, cessation and path. 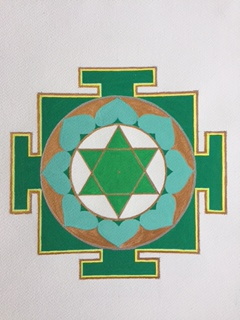 Mercury is nearly the smallest planet in the solar system and therefore is known for quickness, restlessness and changes in character. He is represented by the number Five. Five is a number of balance and harmony. The manifested world is a balance of five elements – Space, Air, Fire, Water and Earth. We have five sense organs (ears, eyes, nose, tongue and skin) and five organs of action (feet, hands, rectum, genitals, mouth) and when they are in balance we excel.

Mercury is also known to be youthful, playful and witty. A limerick is five-lined poem that is humorous.

The Yantra is painted parrot or shades of emerald green and green is the colour of balance, harmony and revival. The negative effects of green is materialism and envy.

Mercury is called Budha in Sanskrit, meaning the clever and intelligent one. Painting the Yantra can introduce flexibility and youthfulness in our lives. 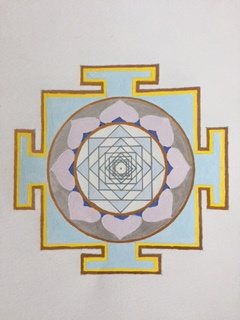 Venus is the planet of romance, love and sensuality. In Sanskrit Venus is called Shukra which means semen. Venus is represented by the number 6. Six is the number of perfection and beauty. We encounter life in six different flavours – sweet, sour, salt, pungent, bitter and astringent. The water element controls how we experience the flavours of life. And if we allow Venus to go out of balance in our lives, we encounter one or more of the six fold sins of Desire, Anger, Pride, Illusion, Greed and Envy.

The Yantra is in shades of light blue, mauve, pink, white and lots of silver giving it a luminous appearance. Venus is the brightest star in the solar system. The interlacing squares in the centre of Yantra resembles a diamond, which has the highest refractive index.

By painting the Yantra one can become more aware of beauty in our surroundings and in our inner selves. Venus in a Vedic chart of a male represents his spouse, and this Yantra can be drawn and painted to invite a partner or as a remedy for an afflicted Venus. 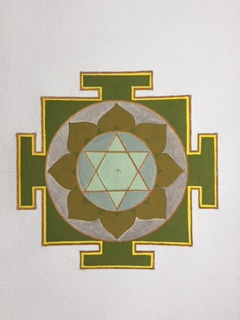 Ketu is the other shadow planet, the counter part of Rahu, the south node of the moon. In mythology he is depicted headless, as the head is Rahu. Because he is headless, he is psychic and intuitive. He is not interested in material pursuits. He is the significator for liberation. He is represented by the number Seven.

Number seven is a spiritual number, there are Seven Sages, Seven Stars or Pleiades is the starting point of the Ecliptic in the Sidereal System and one has to transcend seven worlds to attain liberation.

The colours used for painting this Yantra are greens, browns and silver grey to give a smoky effect. One can paint this Yantra for detachment from material affairs, and to develop intuition to progress towards spirituality. 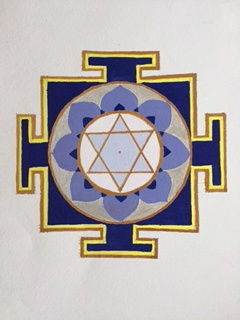 Saturn is the slowest moving planet in the solar system. He brings your karma to you. He slows you down so that you can learn the hard lessons of life. With Saturn one learns patience and forbearance. When Saturn is ill placed, life is very hard and such individuals may be melancholic or rebellious. When Saturn is well placed in the chart, the individuals are disciplined and traditional. It is represented by the number Eight.

Eight is the number of Matter or Prakirti (3 gunas plus 5 tattvas) and the individual suffers 8 bondages (ashta pasha) while associating with the Matter. They are Hate, Shame, Fear, Doubt, Censure, Family, Caste and Modesty. This number can also signify effort as one can remove suffering by knowledge and perseverance. The Buddhists prescribe the eightfold Path to remove suffering- Right understanding, Right thought, Right speech, Right action, Right livelihood, Right effort, Right mindfulness, and Right concentration.

By painting this Yantra, one can seek simplicity, solitude, understand suffering and learn patience. It can help us to correct willful behavior and bring discipline into our lives. 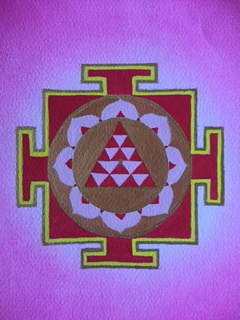 Mars is the planet of action, focus and dynamism. He has a strong sense of duty and purpose. He is the Commander-in-Chief of the Gods, therefore a proven warrior. He is easily angered, attention seeking and self-centred. An afflicted Mars can be aggressive and argumentative. He is represented by the number Nine.

Painting a Mars Yantra can make one purposeful and courageous. One can also paint this for protection or to win a battle.