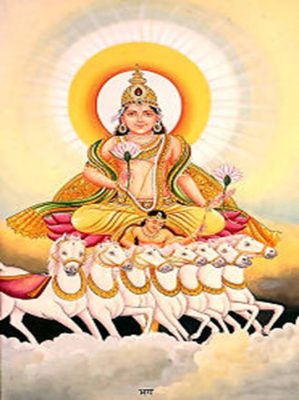 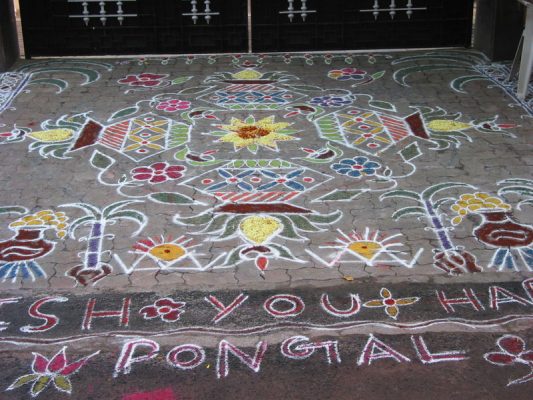 Happy Pongal and Makara Sankranti to all! Sun will be in Capricorn from 14th January until the 12th of February and is blessed by Bhaga Aditya. Bhaga means dignified, majestic or possessing excellence and it is from this meaning that the word “Bhagavan” – the adorable or divine one has been derived. The word Bhagavan denotes one who has all the auspicious six attributes – jñāna (knowledge), shakti (energy), bala (strength), aishvarya (sovereignty or wealth), virya (vigour), and tejas (radiance or splendour).

Bhaga is married to Siddhi and therefore the one who attains Bhaga will achieve Siddhi, perfection. Capricorn is the natural 10th house, the sky or the seat of power. When the Ascendant lord is in the 10th house, there is a Siddhi Yoga from birth. 10th lord in the 10th also shows perfection at work and chaturasiti sama dasa is used for analysing the horoscope with this placement. The type of siddhi that one can attain depends on the nature of the planet, its tattva and the sign. Jupiter in the 10th will give the capability to connect bringing the Akash tattva (space). The agni tattva(fire) of Sun gives knowledge of power and the capability to hold it and enjoy comes from the prithvi tattva (earth) of Capricorn. When the Sun in the 10th house, it has directional strength and the blessing of Indra, the King of Heavens, who ruthlessly vanquishes what he perceives as competition and enemies. However, this position of Sun is not very favourable to the younger siblings and competition as Sun does not like the 6th house from where it is placed.

The one who attains the glory of Bhaga can be great, eternal and the master of all attributes derived from the meanings of the names of his three sons – Mahima, Vibhu and Prabhu. Bhaga’s daughter is āśi – meaning to partake or bestow. It follows therefore, he is the patron of good fortune, and bestows wealth and one’s shares. However, he can be unbending in nature and accused of perpetuating his own agenda. The story told from Shiva Maha Purana was that he was blinded by Nandi, the mount and guard of Shiva for partaking the fruits of the infamous yajña of Daksha who was the father- in-law of Shiva, where Sati (wife of Shiva) immolated herself. This nature of Bhaga manifests in a tunnel vision without respect for other’s concerns. With power comes great responsibility of how we wield it.

We start the year against the backdrop of kala sarpa yoga. Sun moves into Capricorn to join Saturn and Mercury. Mercury turns retrograde the very same day and remains retrograde until 4th of February. Saturn enters combustion from the 19th January and remains combust until 21st February. Sun/Saturn yoga is called a pitra dosha and the exact conjunction is on the 4th of February. This combination of these three planets does not forebode well for initiating litigations or battles. The combustion of Saturn is a time to focus and purify the intentions of our actions.

Mars joins a retrograde Venus in Sagittarius on the 15th January. This marks the start of the long conjunction period till 23rd May of Mars and Venus through various signs of Sagittarius, Capricorn, Aquarius and Pisces. Venus turns direct on the 29th January but is heavily afflicted by the malefic conjunction of Mars. It is also flanked by the yoga of Sun, Saturn and Mercury on one side and Ketu on the other side. Furthermore, Venus and Mars lock into a battle on the 12th February (when the Sun is about to change sign) for an entire month creating conditions for wrestling. Venus will be victorious but it will very draining as this union creates an explosive effect called Gandanta. This is a time when relationships can be tested, we can feel hemmed in or restless. Venus with Mars can also lead to unbridled passion and affairs that cannot be sustained. People with Ascendants or Moon in Sagittarius need to be particularly careful. The sign of Gemini is protected by Jupiter’s planetary aspect. This is not a time for extreme reaction but of quiet introspection to what we are bringing into a relationship – our expectations, emotions and judgements.

Jupiter remains in Aquarius blessing the signs of Gemini and Libra.

Finally on a good note, the Tamil harvest festival of Pongal falls on this transit and marks the start of the journey of Sun northward (uttarayana). I was planning to be in India to enjoy all that this festival offers, Pongal (boiled rice), sugar cane and some gifts from my brother (yes, sisters collect gifts from brothers on this day). My plans were waylaid by this chaos caused by the omnipresent omicron! Cows are decorated with elaborate art work and bells and worshipped on this day. The front porch of the house is decorated with kolam (rangoli) – elaborate drawing-art done with rice-powder.

Let us pray to Bhaga for dignity and excellence in the way we do our work.