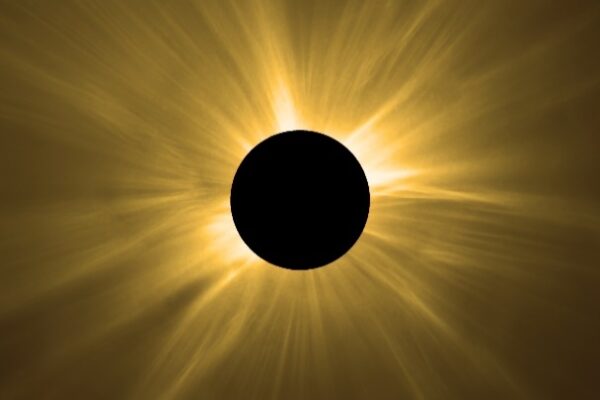 The solar eclipses in 2020 continue to take place around the solstices; the first eclipse on June 21, 2020 will be on day of the midsummer’s festival in June a few hours after the actual summer solstice. To know more about the about the impact of having eclipses around the solstice, read my article “Great Pause of 2020 – Solstices and Solar Eclipses” in the Gochara magazine of BAVA available online.https://www.bava.org/the-great-pause-of-2020-solstices-and-solar-eclipses/?doing_wp_cron=1590818666.1016020774841308593750 The June annular eclipse will be the last of the eclipses taking place in the Gemini-Sagittarius axis before the nodes Rahu and Ketu retrograde into the signs of Taurus and Scorpio in September. The June eclipse is indicative of frustration with many planets retrograde whilst the December total eclipse shows danger to life through the formation of śūla yoga, Sun in sandhi, and Jupiter at war with Saturn. These eclipses are taking place in the backdrop of the long conjunction of Jupiter and Saturn, called Bṛahma yoga which brings about creative solutions. The world is gripped by the pandemic of the coronavirus and this conjunction of Jupiter and Saturn will ultimately deliver a solution to it. The eclipses are a special time for those with ascendants in Gemini or Scorpio or who have their natal Sun or Moon in Mṛgaśiraṣa or Jyeshta. It will be interesting to watch events in the UK and USA as the key statesmen of the two countries – Boris Johnson and Donald Trump have their natal Sun in Mṛgaśiraṣa and Moon in Jyeṣṭa respectively.

The first eclipse of the year starts in the early hours of June 21st, immediately after the summer solstice on June 20th at 22.43 hrs. The eclipse is also an annular one visible in large parts of Africa, Southern and Eastern, Europe India, Nepal and China. The peak eclipse will be at the border of Nepal and India. This will be the last eclipse along the Gemini-Sagittarius axis where the nodes are exalted. Exalted nodes bring about a heavy karma and combined with a solstice, the impact should be memorable. The last time we had an eclipse on the same day as the summer solstice with the nodes exalted in Mṛgaśiraṣa was in the year 2001. This June’s eclipse is in the 4th pada of Mṛgaśiraṣa nakṣatra in the sign of Gemini. The deity ruling Mṛgaśiraṣa is Soma, the god of nectar who is responsible for healing, herbs and cooling of the planet. True to the characteristics of Gemini, there is a lot ofdesire and sensuality in this nakashtra.

Most planets are retrograde indicating that there will be many trials and attempts at solving the issues created by the pandemic. The only planet that is not retrograde is Mars and it aspects the eclipsed house. Jupiter and Saturn are in a conjunction in the sign of Capricorn in Bṛahma yoga, which is a harbinger of a huge creative effort. Often the blessing is in the opposite sign, which is of Cancer which represents the healing and the ability to find a vaccine. Capricorn is an earth sign and is considered not very fruitful. One reaps the rewards of only 25 percent of the efforts made. Jupiter is very weak as it in the sandhi (below 1°) retrograding slowly back into Sagittarius. Jupiter will re-enter Capricorn twice to meet Saturn, once in November 2020 and then in September 2021. The repeated conjunctions in the sky show the trials and tribulations in finding a solution to the pandemic. A breakthrough is possible only when Jupiter gets an upper hand in the conjunction and crosses over Saturn in longitude which is not till the very end of this year.

Mercury is the key planet in the horoscope as all the planets are in four signs in a Kedāra yoga and it is also the ruler of the eclipsed house. Mercury is in Gemini and though it is not combust it is retrograde and indicating that recovery of business will take some effort and time. 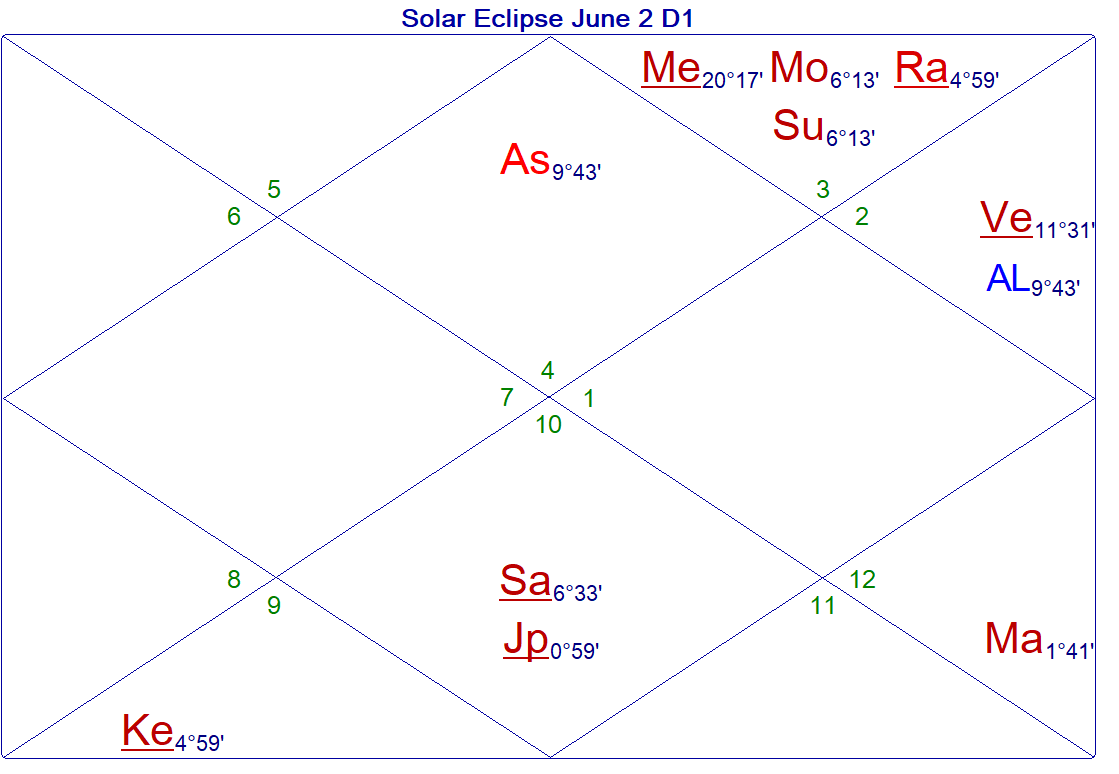 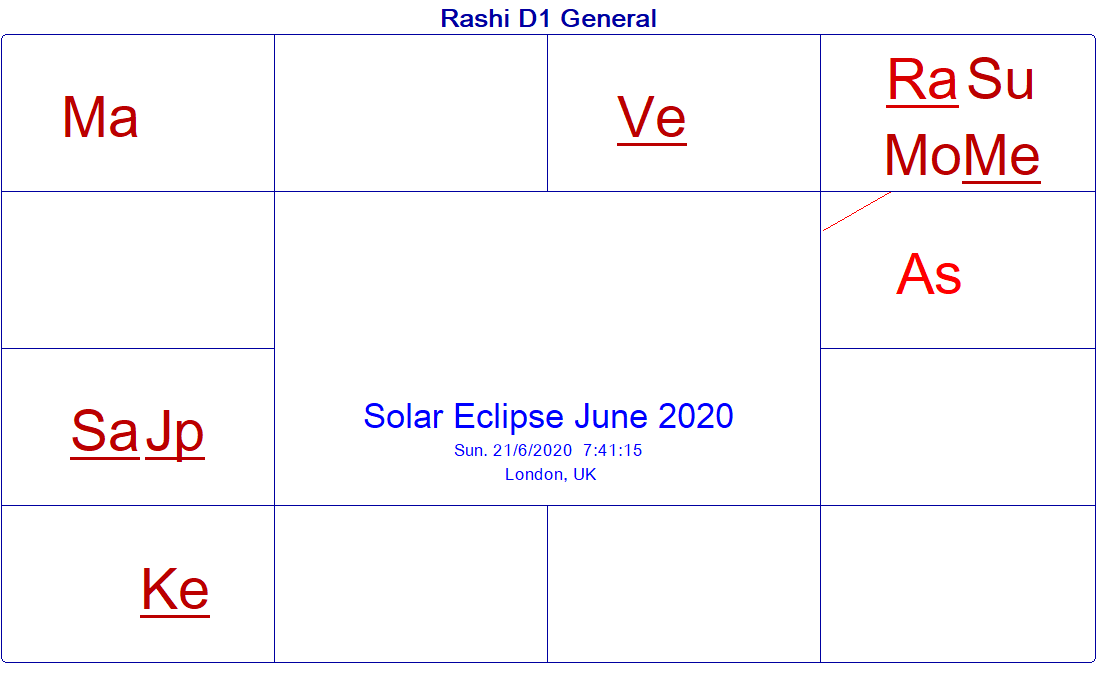 People or countries with their natal Ascendant in Gemini will have to make allowances for a substantial change in life. These changes may have been visible from the time of the first eclipse on the Gemini-Sagittarius Axis in July 2018. Those already in the process of transformation will settle down within 6 months of the nodes transiting into Taurus and Scorpio on the 24th September.

If the natal Sun or Moon is in the asterism of Mṛgaśiraṣa in Gemini, it is a matter of concern of reputation or health of that person or country. Boris Johnson, the Prime Minister of the UK has Sun in Mṛgaśiraṣa and will be affected by the eclipse in the 6 months succeeding it. A detailed look at his chart reveals that he will struggle with enemies both internal and across the borders. I will be writing a separate article on him shortly. Sun is also in marana position in the 12th in the eclipse chart cast for the peak time of eclipse in London. This could prove to be troublesome for the country as the UK’s progressed chart (144 years from 1801 to 1945) has its Ascendant in the sign of Leo. The country will suffer in getting its finances in order.

Quoting from Bṛhat saṁhitā1, “if this eclipse is in the sign of Gemini, high class women, kings and powerful ministers and the like and persons proficient in fine arts would be affected”.

The solar eclipse in December will be a total one, visible in South America and the Pacific Ocean hitting the land masses of Argentina and Chile. The eclipse will happen in the 4th pada of Jyeṣṭa nakṣatra in the sign of Scorpio. Jyeṣṭa is ruled by the King of the Heavens, Indra who is a symbol of authority and protection. People in power or authority may be challenged. Akin to the characteristics of Indra, this nakṣatra is known for manipulative energies and the focus on image building. The Sun is the highest degree in the sign at 29° in sandhi showing danger to life and is also the Atmakāraka which represents a King of the chart. 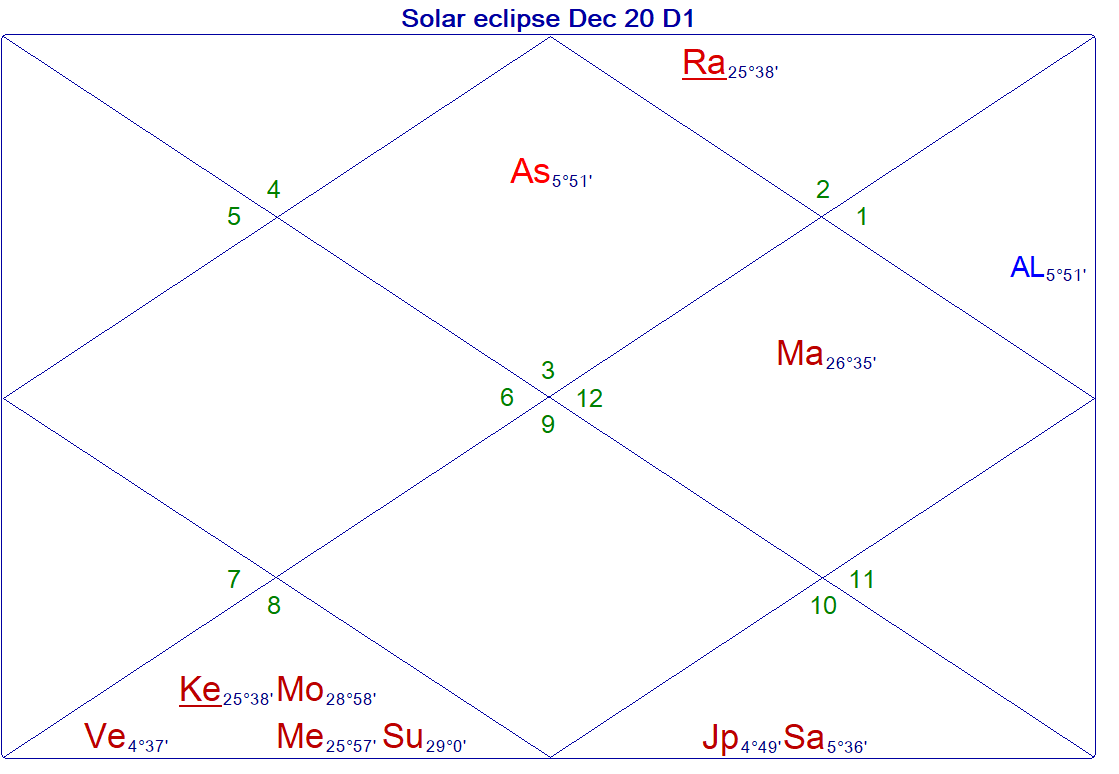 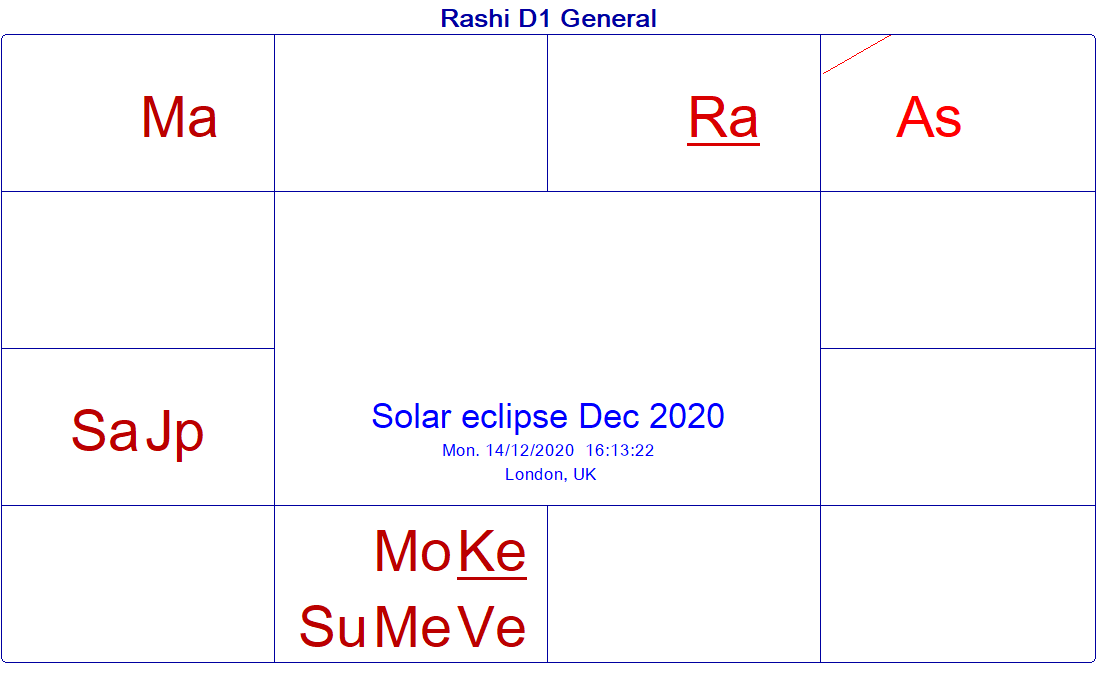 The skies are more fraught with danger because the planets are in 3 houses making a śūla (weapon) yoga. Mars becomes the key controller. Mars is the owner of the eclipsed Sign and from Pisces it cannot aspect Scorpio. Mars in Pisces in Revati nakṣatra will not be keen to take up arms. Jupiter has a sign aspect to the eclipsed house from Capricorn. Jupiter will have re-enter Capricorn in November and will be in a war with Saturn at the time of the eclipse. Jupiter is at a lower degree and will emerge as the victor crossing over Saturn on the 25th of December. I think this will be the timing for the first breakthrough in the discovery of a vaccine for coronavirus. Jupiter stands for jīva, life. The conjunction of the two planets will take place in Uttarāṣāḍha nakṣatra known for truth and victory. Jupiter will remain in Capricorn until early May 2021, and in this period some positive testing and mass production of the vaccine can be expected. Venus and Mercury, the rājasic planets are involved in the eclipse bringing trouble to business, educational institutions, healthcare and women.

People or countries with natal Ascendants in Scorpio will be affected the most by dramatic changes in life. If the Sun or Moon is in Jyeṣṭa nakṣatra there is a possibility of danger to reputation and power or ill-health. The US 1920 progressed chart (144 years from 1776) has its Ascendant in Scorpio. President Donald Trump who has his natal Moon in Jyeṣṭa only 30 minutes behind the Moon in the sky at the time of maximum eclipse is likely to be affected. As the eclipse will affect both the country and the President, thus we should be looking for some transformational change in the USA during the 6 months following the eclipse.

Quoting from Bṛhat saṁhitā, “if this eclipse is in the sign of Scorpio fighters that use poisoned weapons and trees will be destroyed2.” This can imply a weaker position for secret service and sting operations or that they may be exposed. There is also a possibility that the conspiracy behind the story of the coronavirus spread could be revealed.

This eclipse is not followed by a lunar eclipse hence there is a greater chance that there could be more disturbances in the behaviour of people.

The Solar energy or the Agni (Fire) gets weakened in an eclipse. Fire gives us the ability to discern, visualise and digest. The digestion is both for knowledge and food. Light is necessary for truth and knowledge. Seekers and those affected should worship the Sun or in our tradition pray to the “Father of the Universe” to reduce bad energy and restore the glory of Sun. We recommend praying to the teaching form of Shiva called Dakṣiṇāmūrti. Giving to charity on this day is also highly encouraged. Observe fasting at the time of the eclipse as the digestive process will be weak during the eclipse.

Teachings of Pandit Sanjay Rath at the workshop on Eclipses 2010, London