Ponderings on the Atmakaraka graha

There is always a debate about whether malefic planets as the Atma Karaka are more beneficial to the progress than benefic ones? Atmakaraka graha is the graha that has achieved the highest degree in the horoscope. It is the graha that most identifies with the Atma or the spirit, however different from it. It can be construed as Ahamkara responsible for creating identity, personality and propels us to do actions. It is this aspect that claims doer-ship working together with information provided by the other components of subtle body such as memory, intellect, the emotional mind and the five sensory organs. It is because of this Ahamkara, that I identify myself as British or Indian, a male or female, extrovert or introvert and success or failure and propelled to do endless actions. It is often mistaken by us to be the true self instead of the Atma.

Atma itself is the witness consciousness that is present everywhere and is defined in Tattva Bodha as that which other than the gross, subtle and causal bodies, which is beyond the five sheaths and is the witness of all the three states of waking, sleeping and dreaming. It is not available for any transactions in the manifested world directly and is not associated with doer-ship.

In my jyotish parampara, it is taught that Atmakaraka is like a filter and depending on the graha that is the atma karaka, we look at ourselves and the world coloured by that filter. It is what binds us to this body, mind and the world.

On the issue of preference of a malefic or benefic graha as the Atmakaraka, here I am inclined to quote Carl Jung. “A favourable environment merely strengthens the dangerous tendency to expect everything from outside – even that metamorphosis which external reality cannot provide, namely a deep-seated change of the inner man”.

In my understanding, the deep inner awakening and questioning is usually facilitated when things do not happen our way, when we face obstacles head on, we are forced to enquire into our assumptions that have always previously worked for us. When we adapt by making changes in our deep rooted behaviour, the process is called change in cognition and transformation ensues.

Often, when things are going our way, the Ahamkara associates this with success and a reward for the exercising positive choice. There is doer-ship. Successful people attribute nothing to chance, grace or karma and attribute all their success to their strengths and talent. However, when we are faced with troubles we do look into ourselves deeply in order bring about a change in behaviour or seek grace (unused karma credits sitting in our account). This is usually initially done to seek a shift in our immediate external environment as humans rarely change when there is no pay-off, perceived or real. The really lucky ones (who the world will coin as losers), will see an inner shift that will help them see the outside world in a more benign way, albeit there may be no observable change in the external world.

Even in Buddhist Cosmology, a birth in Human realm or Earth is considered most superior than others including the God’s realm. It is here on this earth, though one labours, one can earn merit and attain liberation from the cycle of birth. In God’s realm or Heaven, there are comforts, however one merely enjoys the merit and have to fall back to the earth when they are exhausted. There is no permanent
evolution.

In the story of Mahabharata, Kunti the mother of the five Pandava Princes explains this principle of positivity in adversity succinctly. Quoting the Bhagavata Purana (1.8.24&25) “your Lordship has repeatedly saved me along with my sons from a series of calamities, it is you who protected us from poison, from a huge fire, from cannibals, and from the assembly of wicked people. May calamities befall us at every step through eternity, O Teacher of the world, for it is in adversity alone we are blessed with your sight which eliminates the possibility of seeing another birth. A man whose birth, power, learning and affluence only serve to swell his pride and is unable to utter your name”.

Sage Parasara in Chapter 2 of Brihat Parasara Hora Sastra maintains that all the grahas are record keepers of karma and they bestow the karma on living beings. The Atmakaraka graha is chief amongst them as it has traversed to the highest degree in the horoscope. It carries the record of the memories of our inner most desires and karma. While it promises many raja yogas, it can act against our volition when it has to fulfil the karma indicated by it and can seem punishing when we resist compliance. Note the relationship between the Ascendant Lord (will power) and Atma Karaka as well as the 9th Lord (lord of destiny) in your horoscope to get a holistic view on the quality of life.

Atmakaraka grahas will be behave differently as per their nature and the dignity of placement. Benefic planets such as Jupiter, Moon, Mercury and Venus will be more benevolent and less exacting in their methods compared to malefic ones such as Sun, Mars, Saturn and Rahu.

Whatever be the Atmakaraka when afflicted by placement or conjunction, there will be a perceived suffering due to obstacles especially during the dasha of the graha. When we experience suffering, we tend to redeem ourselves by seeking better company, higher knowledge, chanting of mantras, yoga and meditation and serving others. The point to note here is while sattva grahas such as Jupiter and Moon will have a forgiving nature and can be pacified (sama – accept error, talk it over and seek grace). Rajas graha planets such as Venus and Mercury are pacified by donation of money or articles (dama). Sun and Mars, the planets of the fire element, like to punish instantly as they believe in “eye for an eye”. They associate meting punishment akin to fulfilling dharma and tend to be objective (danda). The methods of Saturn and Rahu are indeed noteworthy as they can seem not only punishing but also as enjoying the inflicting of pain. They are the masters of creating differences between people (bheda).

It is said that the solution to any problem often lies on the opposite side of it. Look at the graha opposite to the Atmakaraka graha on the dig chakra. If Individuals with malefic Atmakaraka genuinely pursue enlightenment, they can redeem themselves by going in the opposite direction. A Rahu Atmakaraka person will seek knowledge as Jupiter is the graha opposite to it in the dig chakra. A person with Saturn as Atmakaraka will end up in true renunciation (vairagya) as he would see a lot of sorrow in life. A person with Mars as Atmakaraka can convert his temperament from anger to ahmisa or non-violence, prescribed by Mercury. Individuals with benefic Atmakarakas when placed well will have better opportunities in life and will be in a position perform good deeds for the greater good. Being aware of the perils of the path of the graha opposite in the dig chakra may serve them well. 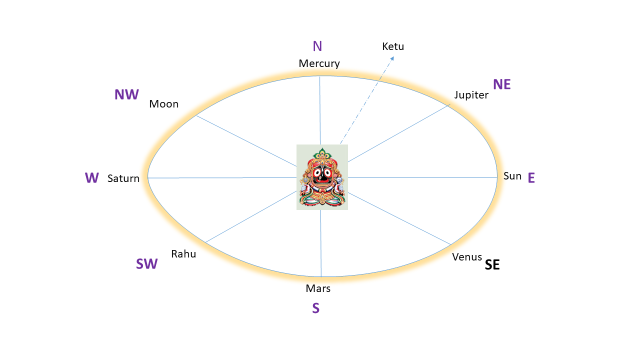 To make a complete judgement on which graha is more welcome depends on the goals of the individual. It is better to accept the path indicated by the graha and surrender to that. No path is really easy. One can only wish for alignment between the goals of Atmakaraka graha and the Ascendant Lord as well as the 9th lord for a comfortable journey in life. I think it may be more important to consider in light of this, whether a stronger or weaker Atmakaraka is more desirable?

I summarise below the teachings of my jyotish Guru Sanjay Rath in my words on what an individual needs to overcome with every graha as the Atma Karaka, even though he will be supplied and tested with many events that just bring the opposite attribute into his life. For more details please refer to his book on “A course on Jaimini Maharisi Upadesha Sutras”.

13 Replies to “Ponderings on the Atmakaraka graha”