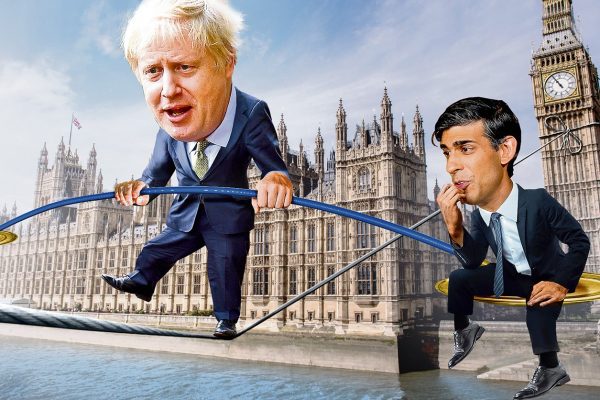 Image adapted from the publication `Sun’ 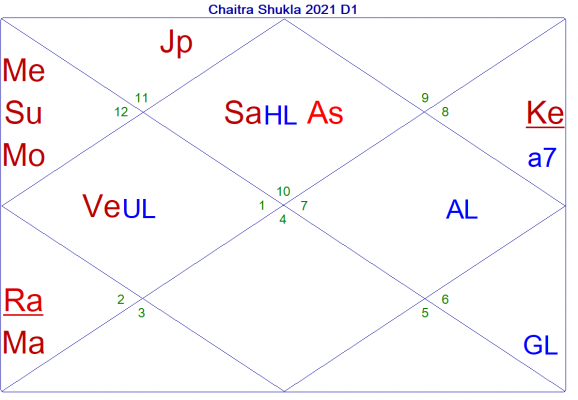 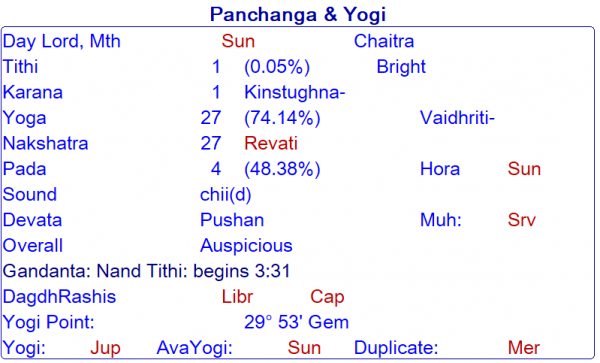 The Caitra śukla pratipada, the first day of new moon in the month of Caitra (Sun in Pisces) for a country shows the karma for the country and the ruler. The Caitra śukla pratipada for UK in London falls on April 12th at 3.31am. Saturn is strong in the Ascendant in saśa mahāpuruṣa yoga in Capricorn and its aspect by Rahu from the 5th can show stormy periods. Saturn in the Ascendant shows the need of the hour as resilience and care for public affairs. The day lord (vāreśa) is Sun who represents the person in charge, Boris Johnson the Prime Minister. It is placed in the 3rd house of battle with the 6th lord Mercury – opponents and Moon the lord of 7th house of diplomacy indicating difficult times to continue for the PM. We have to presume that he will eventually win over his opponents as Mercury is combust and debilitated. Sun is also flanked by two benefics on either side in a śubha kartari yoga by the planets Jupiter and Venus who represent ministers and advisors. However, Venus is very powerful in the chart as it exchanges its digbala (directional strength) position to join Rahu in his own house with Mars. It will be interesting to note to see whether the Chancellor Rishi Sunak (Venus represents finance and treasury) changes his favour. Jupiter the lord of the 12th house of losses and 3rd house of battle is in the 2nd house, showing considerable stress to the treasury.

Until recently the double act of PM Johnson – read optimism and of the Chancellor Sunak of fiscal responsibility has found success for the Tories. However the Chancellor may want to raise taxes sooner than later contrary to PM Johnson. As the lord of the 5th house, Venus will definitely determine the fate of support and power for the PM. Venus will also give the results of the Ascendant lord Saturn in Capricorn. It is worth noting that Johnson (19th June, 1964 at 13.54.30, New York) has the Sun and Venus combination in the 10th house in rāśi (D1) and daśāmśa (D10). Sun is with full directional strength and Venus with none and is combust creating instability. It is interesting to note that Johnson is running Mercury Venus daśā, therefore caution is warranted.

The day lord of the solar ingress into Libra (17th October 2021 at 8.11.41hrs) will indicate the support the PM is likely to get from the Chancellor. The day lord is again Sun (same as the day lord for Chaitra Śukla Pratipada) showing similar interests, however with the possibility of the Chancellor wanting some power himself. Let us watch this space. 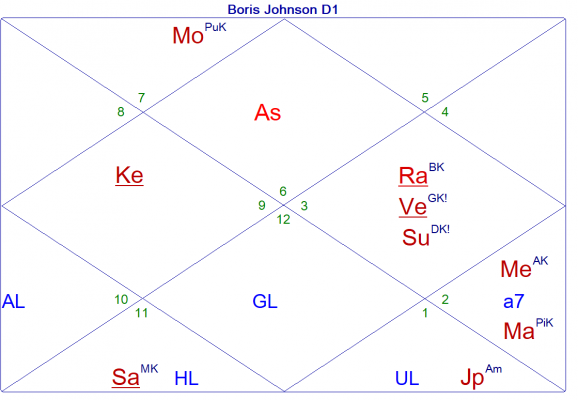 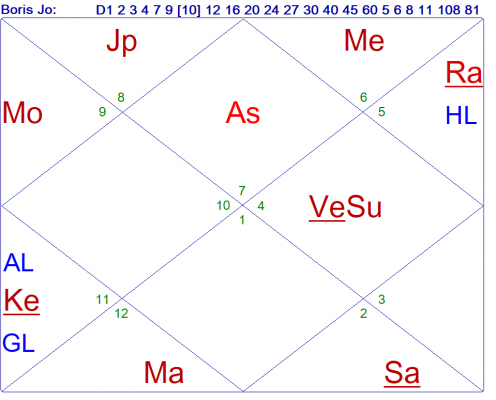 Johnson has experienced a tough time the past year with his natal Sun was hit by the Solar eclipse in June 2020. His situation was precarious, continuously challenged by the COVID crisis on one hand and by his party members and the public on the other. He seemed to have walked the tight rope well as his ratings have improved significantly with the rapid application of the vaccine programme in the country. The challenges remain however for the rest of the year as the solar eclipse on June 10th this year will hit his soul significator, (atmakārakā) Mercury. He is currently running the mahādaśā of Mercury (and the antara of Venus vimshottari) which is combust in his natal chart. The antar daśā of Sun from end of 20th December 2022 should be better for him as Sun is in directional strength (digbala) both in Rashi and daśāmasa. However, when planets are conjunct with each other, they often give results of each other and both these periods which include most of his time in power fraught with tension. The Narayan daśā also indicates caution until September 19th as he will be running Gemini mahādaśā and Capricorn antara which will give the results of the 12th house Leo. Again, the antara of Aquarius until August 2022 should prove better as it will give the results of 2nd house with Moon in Libra, that of popularity. 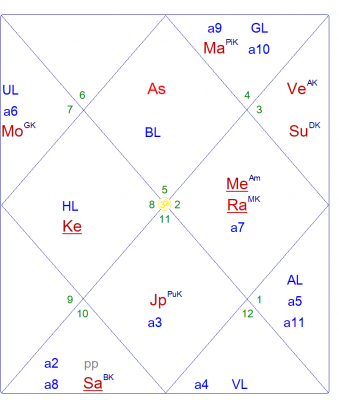 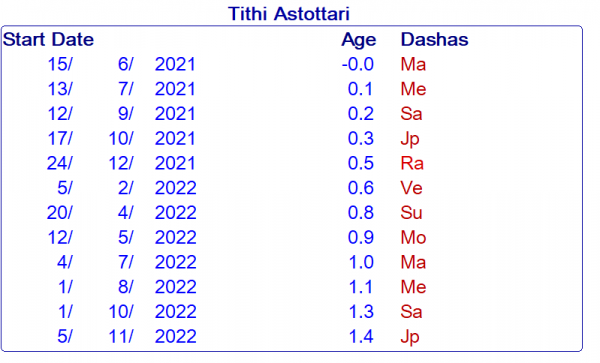 A quick look at the tithi praveśa (20th June, 2021 at 10.37.07 in New York) for PM Johnson shows that 12th house of his natal chart rising which is not auspicious. Jupiter rules the hora that rises and as the lord of the 5th house indicates that power is key issue this year. It is also the co-lord of the 8th house, can bring some unexpected issues to the forefront in October during the period of Jupiter comes in the tithi ashtotari daśā. The 9th lord of destiny is Mars and it is placed in the 12th house of loss or expenses. Our advice to him is to be prepare to surrender a bit of optimism for pragmatism and toe the line of Chancellor’s fiscal plans to keep his power. The Ascendant lord Sun is with the 10th lord Venus in the house of gains, showing the end result could be positive for the PM if he does navigate with diplomacy. That may also prove difficult with Moon being hammered by Saturn and Mars. His birthday month of June will prove troublesome with a ‘ring of fire’ solar eclipse that will not be succeeded by a lunar eclipse creating grounds for rebellion and protests. This could be related to the vaccine as the nakṣatra of the eclipse is Mṛgaśīra in Taurus whose deity is Soma, the healer. We could also expect some summer chaos by way of protests around the vaccine passports and holidays as Venus is the planet for travel and the lord of the eclipsed sign Taurus. For greater clarity read my article written earlier this month on the eclipses for this year at Eye on the Sky – Solar Eclipses of 2021 – Vijaya Jyoti.

A reminder that Mars (by virtue of exchange) and Ketu will be in their own signs in the Caitra śukla pratipada chart for the year, we should expect strict controls over borders and security to sustain.