There are two solar eclipses this year in June and December but not as close to the solstices as the previous year. To know more about the about the impact of having eclipses around the solstice, read my article “Great Pause of 2020 – Solstices and Solar Eclipses” in the Gochara magazine of BAVA available online. https://www.bava.org/the-great-pause-of-2020-solstices-and-solar-eclipses/. The eclipses continue in the sign of Taurus and Scorpio, where the nodes are naturally strong. As these eclipses are not followed by a lunar eclipse this year but preceded by them, caution is warranted. Quoting Varahamihira, people would become unruly and unjust in their behaviour and couples would be loggerheads. The eclipses are a special time for those with ascendants in Taurus or Scorpio or who have their natal Sun or Moon in Mṛgaśiraṣa (Taurus) or Jyeṣhṭa.

The 2021 December eclipse is once again in Jyeṣhṭa giving a final push to resolve the issues around power and responsibility in the US that emerged with the eclipse last December in the same naksahtra. I had written last year in Up in the Air – Solar eclipses of 2020 – Vijaya Jyoti “the US 1920 progressed chart (144 years from 1776) has its Ascendant in Scorpio. President Donald Trump who has his natal Moon in Jyeṣṭa only 30 minutes behind the Moon in the sky at the time of maximum eclipse is likely to be affected. As the eclipse will affect both the country and the President, thus we should be looking for some transformational change in the USA during the 6 months following the eclipse in December 2020”. The current US President Biden also has his Ascendant in the sign of Scorpio. The ex-President Donald Trump continues to be hit by the eclipses as his natal Moon in Jyeṣhṭa and the Sun in Mṛgaśiraṣa in Taurus. This does not forebode well for his reputation, wealth or health. Yet another country that is in the highlight this year is Myanmar which also has a Scorpio Ascendant and its leader Aung San Suu Kyi has her Sun is in Mṛgaśiraṣa in Taurus where the eclipse is in June this year. This is not favourable for power or reputation. Other notable countries that could be affected by the eclipse are  India, Saudi Arabia, Qatar, Pakistan and Thailand.

I had also written in the same article that the long conjunction of Jupiter and Saturn in Capricorn would bring about healing in terms of a vaccine being discovered and approved but only after Jupiter emerged as the victor crossing over Saturn late December. This year we can expect issues regarding travel and vaccine passports and efficacy to gather momentum in June around the solar eclipse. Jupiter renters Capricorn and meets Saturn for the final tango from September 16th to November 21th allowing for further fine tuning and administration of vaccines. The December solar eclipse almost ends with a kala sarpa (planets hemmed between the nodes) in the sky with Mars moving into Scorpio the day after. Freedom from world events will come only in April 2022 when Jupiter moves into Pisces signalling a new cycle while Mercury moves into Taurus breaking the stranglehold of the kala sarpa yoga paving the way for recovery of business. 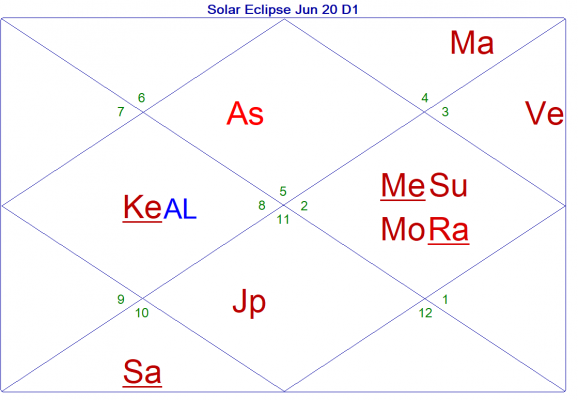 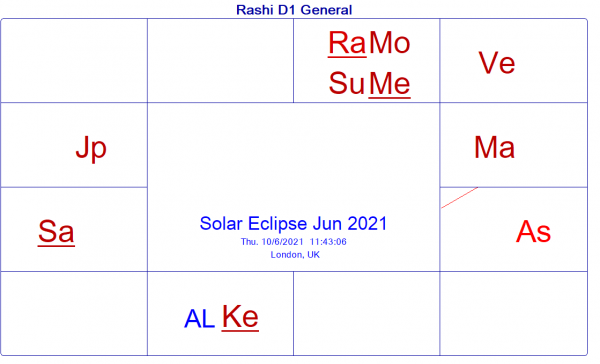 The Solar Eclipse on June 10th is an annular (ring of fire eclipse) in the sign of Taurus in the first pada of Mṛgaśiraṣa. This nakshtara is very sensitive and the ruling deity is Soma who is a natural healer and represents the nectar of life. Could this represent the vaccine? Jupiter will meet Saturn once again and for the last time for the decade from September 16th until November 21th indicating they may go to the drawing board again for tackling mutations. Mercury is retrograde caught in the eclipse but exchanges with Venus, the lord of the eclipse indicating businesses have to make a big effort to make a proper come back. We can expect some major issues around travel and vaccine passports around this time. As this eclipse will not be followed by a lunar eclipse we can expect some chaos and unruly behaviour from the public and high handedness from the authorities. Jupiter does not aspect the eclipsed sign which is not fortunate but aspects Venus the lord of the eclipsed sign. According to Varahamihira, when an eclipse is in Taurus cattle, crops, farmers and people who are prominent can get affected.

People or countries with their natal Ascendant in Taurus will have to make allowances for a substantial changes in life. These changes may have been visible from the time when the nodes moved into Taurus- Scorpio Axis from late September 2020. If the natal Sun or Moon is in Mṛgaśiraṣa in Taurus, it is a matter of concern of reputation or health of that person or country. I have made a small list of personalities and countries that may be effected by this eclipse. Notable amongst them is the Leader of Myanmar Aung San Suu Kyi whose has been arrested by the military and her Sun is in Mṛgaśiraṣa, showing her power and reputation may be affected. Donald Trump reputation and wealth may be at stake as his Sun is in Mṛgaśiraṣa. The area around France is also represented by Taurus. 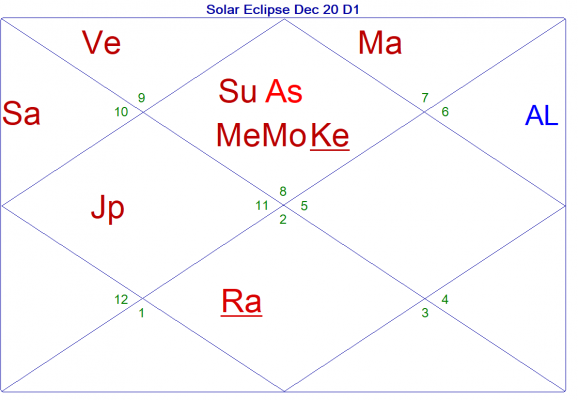 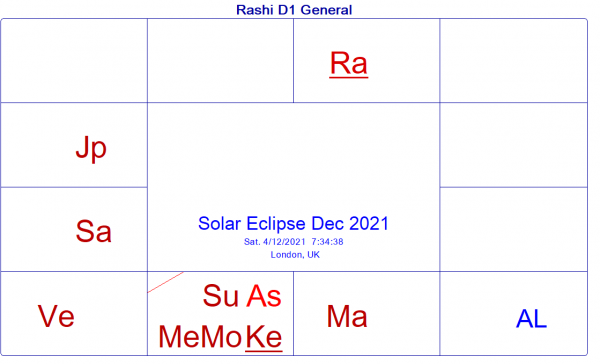 The total solar eclipse in December is very short one lasting less than 2minutes. It is in the sign of Scorpio and in the nakshatra of Jyeṣhṭa in the first pada. Jyeṣhṭa is ruled by the King of the Heavens, Indra who is a symbol of authority and protection. People in power or authority may be challenged. There was an eclipse in the same nakshatra in 2020, which caused chaos in US politics and the eclipse in the same nakshatra the second time could resurface some potential unfinished business around power and responsibility for resolution. Donald Trump has Moon in Jyeṣhṭa and this could affect his health in the six months preceding the eclipse. Jupiter does not aspect the eclipsed sign, not showing his favour. There will be not be a lunar eclipse succeeding it, signalling matters can get out of hand. Mars moves into Scorpio before midnight the same day, thus the skies will have a Kala Sarpa yoga until April 2022.

People or countries with natal Ascendants in Scorpio will be affected the most by dramatic changes in life. If the Sun or Moon is in Jyeṣhṭa nakṣatra there is a possibility of danger to reputation and power or ill-health. Quoting from Bṛhat saṁhitā, “if this eclipse is in the sign of Scorpio fighters that use poisoned weapons and trees will be destroyed2.” Eclipse in the month of Kartika can destroy people who eke out a living from fire –this include, engineers, priests and fireman.

The Solar energy or the Agni (Fire) gets weakened in an eclipse. Fire gives us the ability to discern, visualise and digest. The digestion is both for knowledge and food. Light is necessary for truth and knowledge. Seekers and those affected should worship the Sun or in our tradition pray to the “Father of the Universe” to reduce bad energy and restore the glory of Sun. We recommend praying to the teaching form of Shiva called Dakṣiṇāmūrti. Giving to charity on this day is also highly encouraged. Observe fasting at the time of the eclipse as the digestive process will be weak during the eclipse.

Based on the teachings of my Jyotish Guru Pandit Sanjay Rath at the workshop on Eclipses 2010, London