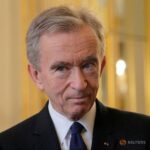 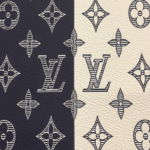 Bernard Arnault is the richest name in fashion and luxury business and is the world’s third richest person in the world currently with the estimated wealth of over US$110 billion. Through his parent company LVMH, he owns the most coveted portfolio  of glamourous brands of Louis Vuitton, Christian Dior, Celine, Loewe, Guerlain, Emilio Pucchi, Fendi, a collection that extends to over 75 mega brands.

I came across his horoscope whilst looking for eminent persons who may have a Mahayogada (great blessing for wealth and power) to present in the BAVA webinar that I gave on the 26th July on the application of Hora Lagna (HL) , Ghatika Lagna(GL) and Yogada who conspires with the universe to shower you with prosperity.

A Yogada is that gift or blessing that is bestowed on us and is indicated by a single planet bringing all the Lagna, HL and GL together by conjunction, ownership or association. The root word yoga means connection or union and dā in Sanskrit is to confer or give. Even the wealthiest of the men such as John D Rockefeller recognised this principle and has said “I believe the power to make money is a gift from God”.

The point of lagna of the chart is the reality and fixes the destiny we are bound to encounter. The HL defines our relationship with wealth and objects in life. When the HL is connected to Lagna then a reasonable amount of wealth for sustenance is guaranteed in life. This planet is called a dhanada and has the blessings of Vishnu, the sustainer in the Vedic Trinity of Gods. Planets in the 2nd or 10th house to the HL can helps us accumulate wealth. The association of these houses with planets that belong to the agni tattva (fire element) such as Sun and Mars is considered good. Agni gives us the vision and rules our movement as it controls our feet.

Similarly the association of the GL with the Lagna shows our ability to desire and hold power. The highest form of power is knowledge and this is translated into wisdom for the spiritually evolved. Such a planet is called Varada, the boon giver and has the blessings of Shiva. GL or 4th house from the GL associated with jala tattva planets such as Moon and Venus show immense popularity and power over people. When one planet brings both these HL and GL lords together, it indicates the powerful combination of the blessings of Vishnu and Shiva.

Maharishi Jaimini has discussed in his sutras that a Yogada will bring Raja Yoga or a great fortune. Sage Parasara in BHPS goes on to say that if the special ascendants like GL an HL and Lagna are aspected by planets in exaltation, the native will be a king.

Arnault has a remarkable story of starting humbly in his family business of construction and real estate and later metamorphosing himself into a most enviable luxury brand tycoon. His ruthless drive and tenacity has earned him a nickname of “a wolf in a cashmere shawl” in the fashion world. It is no wonder that his horoscope has a multitude of powerful yogas, however this article only examines the Mahayogada. 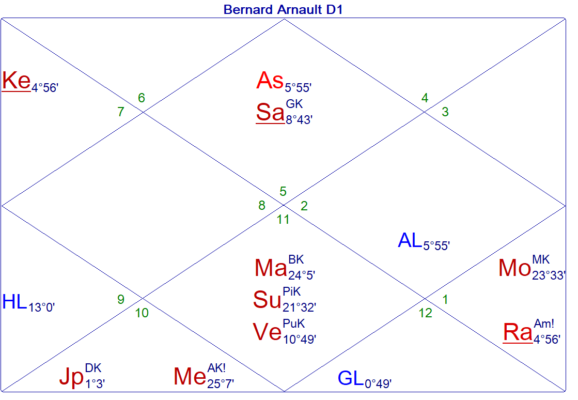 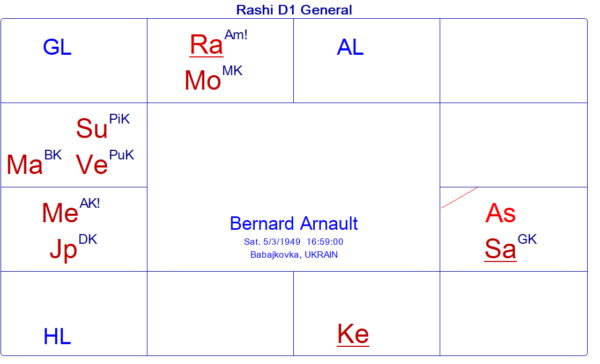 Arnault has Leo as the Lagna indicating the fire element that one needs for success with wealth. He starts off with a natural advantage as Jupiter is the both the lord of HL in Sagittarius and GL in Pisces and aspects the Lagna Leo (sign aspect) from Capricorn. This aspect is called the Abhimukha Dhrishti and one of the powerful aspects that gives immense protection to the Lagna. Jupiter becomes the Mahayogada that brings the lagna, HL and GL together promising great fortune and power. Jupiter is vargottama, but is debilitated and Saturn placed in the Lagna gives the cancellation of debilitation. The conjunction of Jupiter, the Darakaraka (DK) the significator of wealth with the Atmakaraka (AK) Mercury is very fortuitous promising creativity and wealth at the soul level. The Lagna lord Sun is in exchange with Saturn in the 7th house connecting the lagna with the 7th house of business confirming this blessing in the earthly plane. The exchange between the co-lord of the 7th house Rahu and Mars the 9th lord is also promises a destiny from the outside world. The 7th house is very strong with the 10th and 9th lord in conjunction (dharma karamadhipati yoga) with the lagna lord.

Jupiter is vargottama and placed in the 9th house in the Navamsa and it is in deva amsa. It is in the lagna in Digbala in Dasamsa with the Sun. Both the luminaries Sun and Moon in the dasamasa are ruled by the deity of Ishana, therefore Jupiter is the Atma and Manas Drig Devata, showing main purpose in life. There was no conflict in his purpose. Jupiter is also the 7th lord in lagna, indicating he would work independently. I had to adjust the time of birth by one minute ahead to achieve this result. By rectifying the time by a minute, the requirements of D40 (2nd lord in exchange) for a billionaire is also fulfilled. 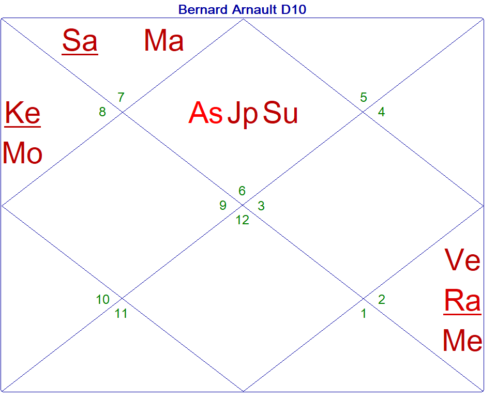 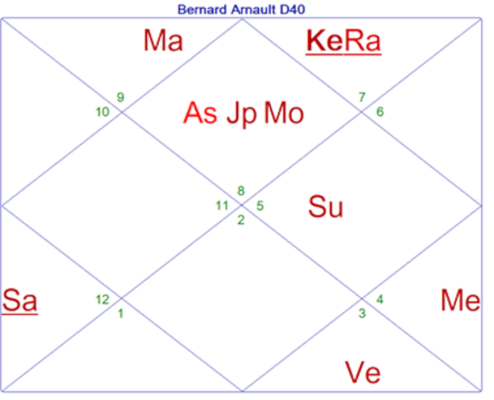 The second house from HL indicates the source of wealth or the articles that can bring wealth. The second from HL is Capricorn with Jupiter and Mercury in it and Saturn aspects it. Antiques are represented by Saturn and he is one of the greatest collector of art and antiques and owns auction houses. He also owns vineyards which is also represented by Saturn. Mercury shows his interest in investing in internet companies such as Netflix and boo.com which have added to his source of wealth. The 2nd house from HL is also the 11th house GL which means his wealth increases because of his influence. The lord of the 11th from GL is Saturn in lagna shows that he desires influence and power. The 11th house from HL is Libra indicates gains and there is Ketu placed in the house. Ketu represents a flag or a brand and is aspected by the potent combination of major yoga conferring planets in the 7th house. The most significant planet out of all of them is Venus who is the 11th lord of HL and 10th from lagna. Venus and Ketu together symbolise the desire and ownership of many luxury brands.

The significations of the house where the HL is what one values in life. It is the 5th house and he values his children. All his children including from both his two marriages with the exception the youngest one who is yet to turn 21 are closely involved in his business and he mentors them. 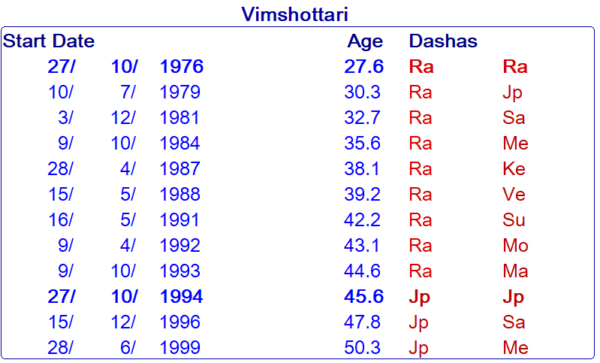 Arnault started the acquiring luxury brands when he purchased the Dior brand indirectly in 1984 by taking a stake in a textile company Boussac that was in distress. He was running Rahu maha dasha Saturn antara which are both 7th lords and Rahu is in exchange with 9th lord Mars. He changed his business direction from real estate business to acquisition of brands. The 7th lord’s connection with the 9th confers a raja yoga and blessings from business. This union is further strengthened by the conjunction of AK Mercury and DK Jupiter. The single most important acquisition was that of the controlling stake of LVMH in 1988 Rahu dasa Venus antara. Venus is the 10th lord in conjunction with the 9th lord in Dharma Karmadhipati yoga and Venus rules the 11th from HL. This company indicated by Venus, became the major vehicle through which he went on a spree of further acquisitions that made him a luxury brand baron. 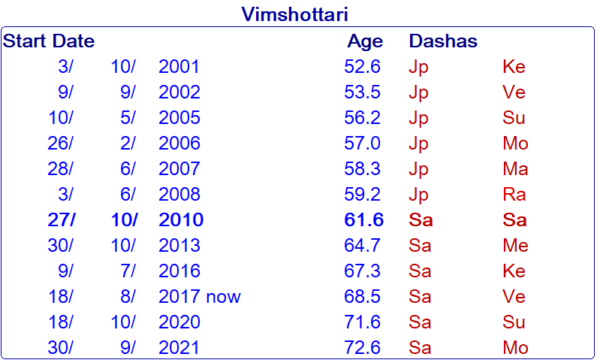 During the period of dasa of Jupiter the Mahayogada, between 1994 and 2010 he consolidated his position by developing the brands by strengthening their presence in the world. LVMH became a formidable giant in the world of fashion and he and his family have gained permanent influence and respect around the world and particularly in his home country France. During the period of Saturn from 2010, he has been investing his wealth in internet commerce and venture capital to grow it as his mission of being the luxury baron was mostly completed in the Jupiter dasha.

A planet who is Yogada brings its own flavour to the success. When Jupiter is the Mahayogada he brings blessings through elevation wisdom and learning. A recent article by the Financial Times on Arnault reports that “the family has a Medici-like influence in France”. Arnault’s love for his country is visible as he donated 200 million Euros for the reconstruction of the Notre Dame that was recently damaged by a fire. He also donated to fight the Amazon fires and cares for the environment. He is a major patron of Arts. From the GL chakra placing the GL as Purnima tithi, Jupiter is placed in the Chaturdashi tithi blessed by Shiva. It is also placed 10th from the Moon with Mercury AK, assuring him an Amala yoga, a clean unblemished reputation.