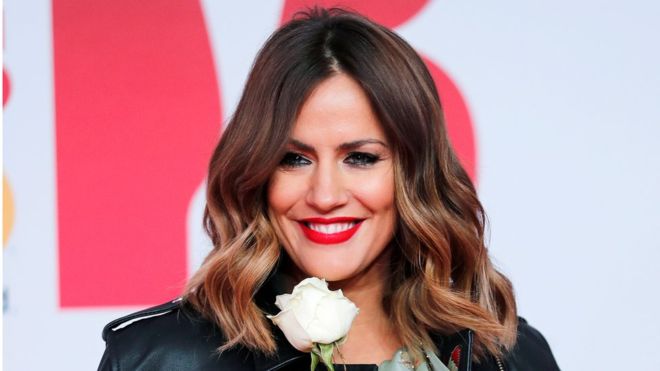 Carolina Flack (above photo from BBC) was an English television and radio presenter of popular reality shows such as I‘m a celebrity- Get me out of here, X Factor and Love Island. She was found dead on February 15th at the age of 40. The cause of the death has been reported as suicide. She was apparently struggling with mental issues of anxiety, stress and depression. She was also due to appear in court for assaulting her much younger boyfriend. She said friends often complained that she was draining and feared being a burden. 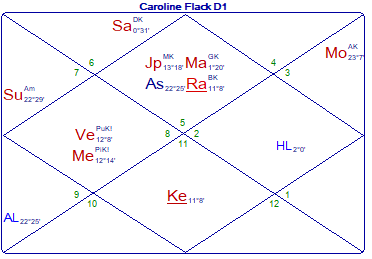 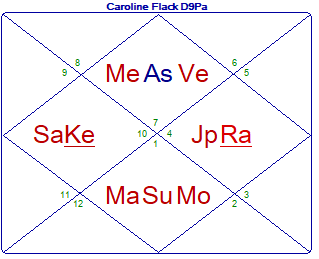 Astrodata bank gives her birth details as 1.30am on the 9th November 1979 in Enfield. The Moon shows the state of mind and it is in Punarvasu nakshatra associated with creativity and enterprise. Moon is also the Atma Karaka (AK), the planet that has traversed to the highest degree, the signifcator showing the purpose of the life. The Shubhapati (dispositor of the Moon) who is the physical sustainer of life in any chart, is Mercury who has lost in a war with Venus who is in Digbala or directional strength. Mental strength is to be looked at the Nakshatra dispositor of the Moon. Jupiter is the dispositor of Punarvasu and is in the Ascendant, strong in directional strength but is compromised by the conjunction with Rahu.

There are no planets either side of Moon forming a Kemadruma Yoga. This yoga can confer disgrace, loss of intelligence and calamities. Such a person might find it difficult to feel connected and or be responsible in society. Planets in 12th house from the Moon bind us to the family and the planets in the 2nd to Moon to the society and field of work.

Planets in Kendra to the Ascendant can break the Kemadruma Yoga. The planets in Kendra to the ascendant are also in upachayas (houses of improvement) to the Moon which further dilutes the Yoga. Planets in upachayas give us opportunities and areas of engagement. Jupiter and Mars are in the 3rd house and Venus and Mercury in the 6th house from the Moon. The conjunction of 9th Lord Jupiter and 5th Lord Mars in the Ascendant is a great Raja Yoga which gave her fame and high status. Venus the 10th lord in Digbala and in directional strength gave her the talent of eloquence. The natural significator of the 3rd house is Mars and that of the 6th is Saturn. And true to the nature of these significators there would have would been a huge struggle and effort to acquire and hold on to the gains typical to any competitive career. There is always an element of discontent associated with gains from the third and sixth houses (as opposed to the 10th and 11th which are also upachayas) as Mercury is the natural lord of these houses. Caroline always felt dissatisfied and depressed with each successive accolade.

However, Moon does not aspect any of these grand combinations. The blessing of Moon is necessary to enjoy great fortunes and the lack of it can nullify many fantastic yogas. Moon is aspected by Saturn giving rising to Kalika Yoga but with no benefic aspect causes depression. Saturn is the Darakaraka responsible for relationships and wealth in Kendra to the Moon. So she would have really been interested in relationships and wealth. Rahu as the 7th lord in the Ascendant, promised her many liaisons but casts a blemish on the Jupiter and Mars combination in the Ascendant. The presence of Ketu in the 7th house is not very fortunate for stability in relationships. Moon in the navamsa of Mars and aspected by Saturn also gives rise to Parvarajya yoga, which the combination for renunciation. Outwardly Caroline was a charming bubbly personality while tackling her demons silently. The world and media only looked at the projected image.

2019 would have been a very tough year with Rahu transiting her natal Moon sign Gemini. The solar eclipse in July in was close to her Moon which could have aggravated her mental state. Saturn and Ketu were transiting her Arudha (image) in Sagittarius forming a Shraddha yoga (funeral rites) looking to cause a scandal and ruin her reputation. Jupiter’s transit into Sagittarius in November should have helped but was too late to quell the storms of Saturn and Ketu combination. In December 2019 she was arrested for allegedly assaulting her boy-friend which she denied strongly, but there was apparently incriminating footage which the prosecution was prepared to use in the forthcoming trial. She was forced to give her position in TV show Love Island. Her mental disconnect became one with the physical isolation that was brought with separation from the boy-friend and work. The thought of being subject to intense scrutiny by media and public during the trial led her to take her life. As the Moon did not receive a benefic aspect, there was little kindness experienced.