Solar eclipse and fate of Republic of Turkey

The eclipse in July 2010 was a total solar eclipse with Surya in Gemini in Punarvasu Nakshatra. We can also say that this eclipse was in Ardra as Ketu at the time of the eclipse was still in Ardra Nakshatra.

We learnt that “if the eclipse is visible at the time of rising or setting, the region would face 1) financial downturn due to poor agriculture; 2) danger or ill-health to the political leaders and government. Further, if the eclipse occurs during the uttaryana, then the brahmana and kshatriya will suffer.

Using this rule, I present the chart of Turkey that has Gemini as its lagna, with Moon in the lagna in Ardra nakshatra. The eclipse started at 20.15 hrs (Turkey is GMT Plus 2hrs) almost close to the sun set time of Turkey at 20.38 hrs affecting its natal lagna. 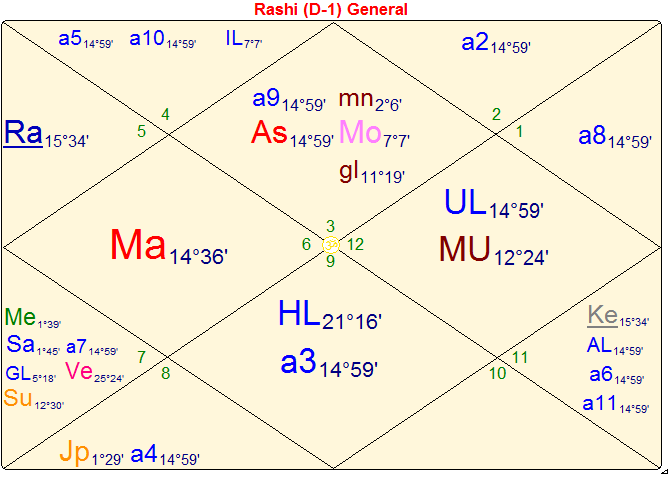 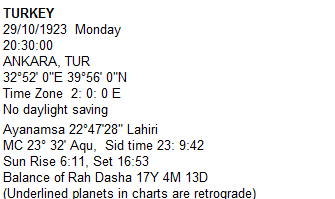 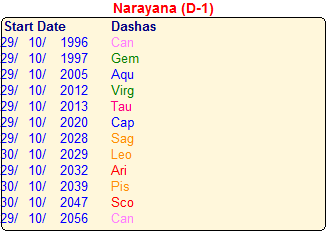 The Lagna lord is placed beneficially in the 5th house with the atmakaraka Venus in swakshetra. This is a bit spoiled by the presence of two malefics inimical to each other – a debilitated Sun and an exalted Saturn. Sun represents the fall of the Ottoman Empire and Saturn, the Republic that seized power at the time of creation. The fifth house is further maligned by the rasi drishti of Rahu.

The 7th house of relationships and the 11th house of friends or elder brothers (other Arabic nations) are destroyed as it receives the graha drishti of Saturn, Mars and Rahu. This 7th house is owned by Jupiter and this may represent United States who are not inimical to Turkey; however Turkey representing Mercury does not trust them and is turning from the 7th house to 11th house (representing their Arabic brothers and military). Looking at the Narayana Dasha, they started Aquarius dasha in 2005 which will end in 2012. Aquarius is the 9th house of good fortune ruled by an exalted Saturn in trine and as such the period has been extremely fortunate so far.

The key question is will Erdogan fall or fail? And why is this important now?

Turkey is seen as a rising power in the Middle East that is more liberal. It’s a bridge between the West and its more conservative neighbours, able to speak both the languages fluently. (Note the lagna is Gemini, Mercury is the sweet tongued God, playing both sides). Israel until most recently has been its ally as well. The importance of Turkey has been emphasised by President Obama’s visit last year to the country.

However, recently their relationships are going awry. Their relations with Israel have been damaged beyond repair after the Gaza flotilla episode that killed Turkish volunteers. The patience of United States may be outrunning as they are not working with the Americans on sensitive issues.

Internally, the Prime minster, Recep Tayyip Erdoğan has been seeking to increase his power by passing an important referendum on September 12th restricting the power of judges and military. Elections are also due in the next 12 months. He is also viewed as seeking patronage from religious institutions in the country which has been constitutionally secular. 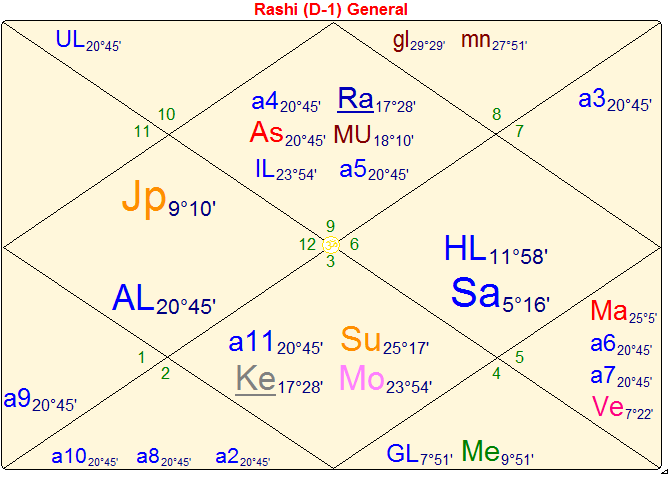 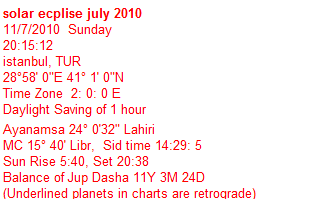 The eclipse lagna is the 7th house of Sagittarius in the natal chart highlighting the problems in its relationships. This eclipse is in Gemini which is the natal lagna. It is aspected by Saturn (both graha and drishti) from the 10th house, i.e. karma kshetra but goes to the 4th in the natal causing problems internally. Rahu also aspects the eclipsed house (again both graha and rasi). However, the situation is not all lost with Jupiter giving a rasi drishti and is transiting the 10th house in the natal chart. The lord of eclipsed house, Mercury is in Cancer, moves to the 2nd house in the natal showing gains.

For argument’s sake, If I use the peak time of the solar eclipse at 21.34 hrs, then the lagna is actually their 8th house which is good being a dusthana house. This means secret enemies are being destroyed or scandals will unearthed. The lord of this lagna Saturn, is placed 5th house in the natal chart, again giving them beneficial results.

In both cases, Saturn the ruler of the current Narayana dasha is placed in the 4th from the Sun, which is not good for the ruler.

However, if one looks at the timing, we get a confirmation that it will indeed be a difficult period for Erdogan. The eclipse started in the last part of the day, so order of planets given by Varamhira is as follows:

The eclipse was at the peak at 21.34 hrs which was owned by Sun, representing Erdogan. The categories of people that will suffer are Jupiter (the judges through the referendum); Mars represents the military and their brothers in their backyard. Mercury being the lagna and fourth lord will result in some unhappiness after the fall out in politics Business might be affected because of the cutbacks of spending in Europe. All is well for the most of the weaker sections of the society represented by Venus and Saturn viz. women and the masses. This means maybe there will be a reverse in the policy of fundamentalism.

A quick look at the Trimshamsa (S-JP) of Turkey shows a Leo Lagna (3rd house of rasi) rising with lagna lord, Sun debilitated in the 3rd ( 8th from the 8th) and receiving the rasi dhristi of Ketu, implying that anyone who takes the position of the king will fall ultimately. The lords of 6th and 8th house of the rasi chart are in the 4th house of the Trimshamsa, showing continued friction between the Army and the Democratic institutions (Mars being the karaka for military and Saturn, the democratic institutions). However, as Jupiter is strong in his house in the fifth, the results are not conclusive.

The politics in Turkey is a heating up. Erdogan is now looking very comfortable and powerful, despite the hora of the Sun being destroyed in the eclipse. This is because Jupiter is protecting the lagna through rasi aspect as well as strong in the Trimshamsa. This Jupiter, represents the backing of the religious institutions and the wealthy of the country.

He may well succeed in his first test on September 12th .

However, there will some consequences of hora of the Sun being destroyed, perhaps as financial meltdown in due course or a possibility of military intervention or both.

One Reply to “Solar eclipse and fate of Turkey”