The total solar eclipse of August 21, 2017 will be visible in North America, It is dubbed as the “Great American Eclipse” and it will be the first one visible there since 1979.

This eclipse will not be visible in most other parts of the world and yet the fortunes of people and countries will be impacted, particularly if their ascendants are involved or Moon/Sun signs are in Leo. Solar eclipse is that moment where we can connect with divine energies and catch a glimpse of the total karma waiting to unfold.

Eclipses are all about shadows and hidden desires. Rahu is the ascending node, where the Moon gains latitude and where one’s desires become more prominent. Rahu causes re-birth and we are born again and again in this earth due our accumulated desires. Ketu is the descending node, where Moon’s latitude starts to recede, pulling us away from materialism towards knowledge and spirituality. Ketu is the planet of liberation and letting go. They create conditions whereby the mind is churned between the opposite needs of Rahu and Ketu to gain wisdom. The placement of Rahu and Ketu in a horoscope show the axis where the maximum wrangling happens.

The story of “Churning of the Ocean (Samudra Manthan)” by the Devas (god-like beings) and Asuras (demon like beings) to obtain the nectar of immortality, from Bhagavata Purana symbolises the birth of Rahu and Ketu. I am not recounting the whole story here, but key message is while churning the mountain Mandara (akin to our mind), the Asuras demanded to hold the head of the snake (symbolised by Rahu), while the gods, taking advice from Vishnu the preserver, agreed to hold its tail (Ketu). The Asuras holding the head, were subject to more poison and dangers. Modern day Asuras are not really demons, but individuals who make huge effort to achieve their material desires, who are not charitable or compassionate and are purely motivated by greed and power. They are spiritually retrograded like Rahu and their desires are insatiable. 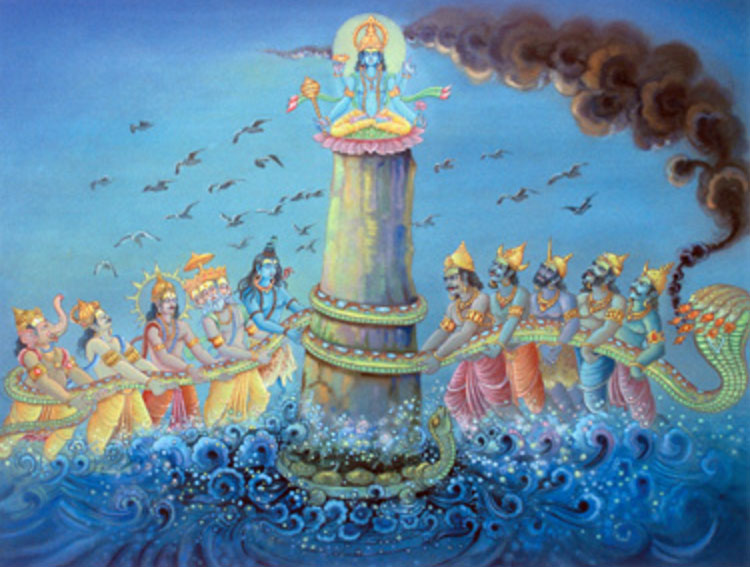 Today, we see this in action everywhere, the world is getting poorer for many and the ones driven by success are not willing to encompass compassion for the larger humanity. 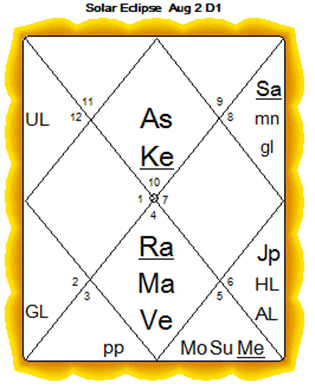 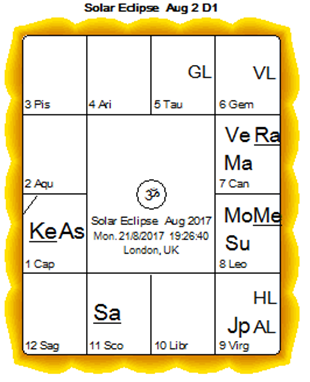 The solar eclipse on August 21st is in the sign of Leo in Magha nakshatra which is the brightest sickle shaped star in the constellation of Leo. Magha nakshatra symbolises a throne, the seat of contention.

The signs aspected by Leo will also be affected. Leo aspects Capricorn (eclipse ascendant), Aries and Libra. Jupiter protects Capricorn by aspect but the other signs of Libra and Aries receive none. The 7th house of the eclipse chart is in the sign of Cancer. It is highly afflicted with the combination of a marana Mars (Mars in the 7th is in marana (death-like) position) with Rahu and Venus. Moon the lord of Cancer is also in marana position in the 8th house, showing people are extremely unhappy.

Who are affected by the solar eclipse?

If your Ascendant is Leo, your entire life may undergo a change. If the moon sign is in Leo, then health or repuation might be affected. This is mitigated if there is an aspect of Jupiter on Leo. The aspect of Jupiter can confront most evils in the world. If Leo is your 7th house, then most likely prospects in business are about to change. Every chart has to be looked at indvidually and the result of every eclipse is not necessarily bad. The impact of the eclipse is usually felt within 6 -12 months and in some cases when the solar birth month is the same as the eclipse, the effect is felt slightly before when the longitutde of the Sun in the natal chart is greater than eclipse longitude of the Sun at 4.47 ⁰.

Varahamihira points out in Brihat Samhita that when an eclipse impacts the ascendant of a country there could be financial pressures, poor harvests and or danger or ill-health to the political leaders and government.

The progressed chart for UK (from 1945) has a Leo ascendant. This shows current turmoil is expected to continue. Moreover, Prime Minister Theresa May, has her Moon in Magha. This does not bode well for UK politics. I have written a detailed article for UK politics separately – UK – Fortunate or eclipsed?.

The total solar eclipse on August 21st is in the sign of Leo and the Vedic month of Shravana. According to Varahamira in Brihat Samhita, when the eclipse is in Simha(Leo), it would hurt tribe of hunters, heroic persons and forest denizens as Simha stands for bravery and forest areas. And when the eclipse is in the lunar month of Shravana, he says that in such a case it will harm the people in the northern direction and internal affairs.

We usually divide the eclipse day into 7 parts to see which hour is most affected. When the eclipse is at its maximum, that hour is said to be affected the most. The eclipse in London starts at the hour of Venus and peaks during the hour of Saturn. This shows that women (represented by Venus) and the dissenting public, opposition, frauds, cheats and people from around the region or border areas (represented by Saturn) will be hurt.

Generally, this eclipse is likely to harbour divisiveness in the UK and we can expect more dissent going forward. There will some instability at the top level, given the Theresa May’s Moon is in Magha. We can also say that the opposition should equally suffer as the eclipse energy is felt mostly by the period held by Saturn. Northern areas and forests can be under further danger of being flattened to access EU subsidies.

As the total solar eclipse on August 21st is preceded by a lunar eclipse on the 7th of August, we can expect more rebellion, divisive politics and hostilities to continue. This rule is more applicable if the country or the individual has the Sun or Moon in the same nakshatra as the eclipse and this is true for UK.

Eclipse are shadows, and one must make the Sun stronger as it gets eclipsed by Rahu. Sun represents the soul or “Jivatma” and such a soul is protected by offering prayers to the “Father of the Universe”. In vedic astrology the pratyadi devata for the graha Surya (Sun) is Shiva. He alone can remove the veil of maya caused by ignorance and we worship his teaching form – Dakshinamurthy. It is advised that that we should 10 rounds of japa of appropriate mantra.

Shiva Purana states, that the reward for any deva yagna (adoration or worship offered to the Gods on behalf of the universe) offered on the day of solar eclipse is multiplied ten times as the poisoned (visayoga) Sun causes ailment to people in the universe. One should give alms and japa for the sake of the world.

Here is a table of celeberties and countries that have their ascendants in Leo or Aquarius and Sun or Moon in Magha nakshatra.